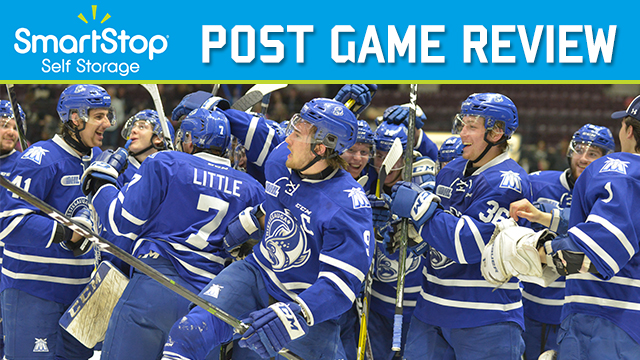 After winning games one and two of the Eastern Conference finals on the road, the Steelheads looked to stay hot against a tough Peterborough team in game three. The Steelheads were able to end the Petes’ eight game win streak. Matthew Mancina gets the call in net for the Steelheads, and Dylan Wells was between the pipes for the Petes.

Both teams came out with speed and determination. The Petes get on the board early in the first period, with a goal from Toronto Maple Leafs prospect, Nikita Korostelev. Both teams exchanged shots throughout the remainder of the period, but both goalies were solid. Petes would head to the dressing room with a 1-0 lead.

Not even a minute into the second period, Spencer Watson picked up his league leading 14th goal of the playoffs, tying the game up at one. The Steelheads dominated the play throughout the rest of the period, only allowing Peterborough to take three shots. Wells making some great saves, to keep the game tied at 1 a piece going into the third.

During the third period no one scored early but the Steelheads did continue to control the puck, outshooting the Petes 11-5 in the period. After 60 minutes, the game could not be solved, and needed overtime. This would mark the Steelheads first overtime period this post season.

Both teams headed into overtime knowing that anything could happen. The Steelheads came out with the same dominating play they had during the previous two periods. Peterborough did have some quality chances, but Mancina came up huge making some big saves. Same goes for the goalie at the opposite end of the ice. Wells facing an onslaught of shots from Mississauga and stopping every one of them. The first overtime solved nothing, we were headed in to double overtime.

After a hard fought 80 minutes of hockey, every player on the ice was exhausted. Both goalies continued to shine, highlighted by a huge stop by Mancina on Korostelev. Coming up on the half way mark, both teams were looking for a hero. Steelheads captain, Michael McLeod, found a burst of energy to skate up the ice and tuck the game winning goal past Dylan Wells. The Steelheads would outshoot the Petes by a total of 55-29.

The Steelheads look to finish off the series on Wednesday night at home for game four. Puck drops at 7:00pm.