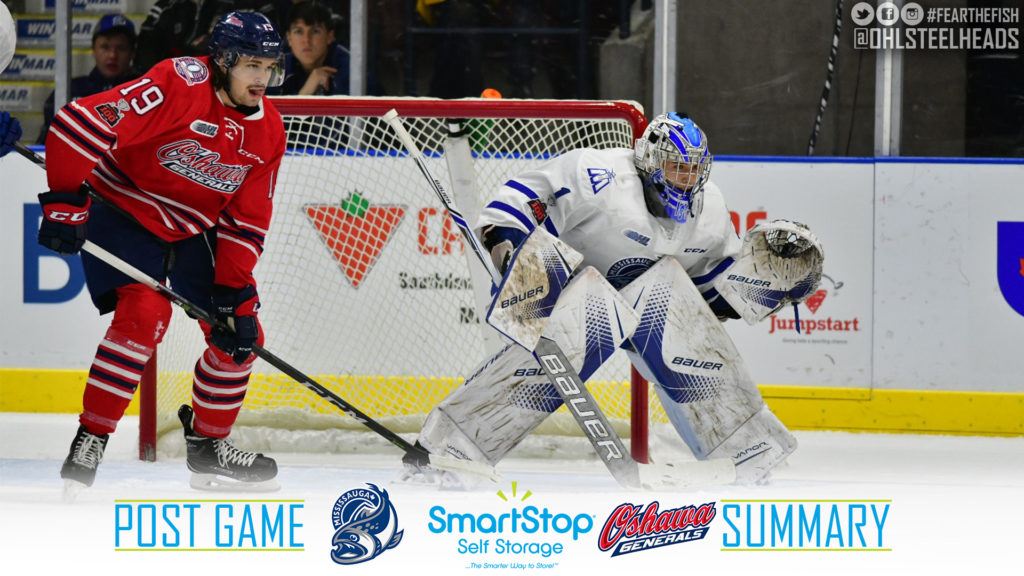 On Friday evening the Oshawa Generals rolled into town to play the Mississauga Steelheads, Coming into tonight’s game, both teams had almost identical records, Mississauga 9-10-0-1and Oshawa 9-10-2-0, and both came out ready to play in what was bound to be a hard fought game. The game started off with Matt Brassard getting sent to the box for a two-minute check to the head on Steelheads’ forward Michael McLeod, who was making his season debut since returning from New Jersey. After some back and forth action, halfway through the first frame, Jacob Cascganette was sent to the box for a high stick minor, but the penalty kill unit went to work keeping the game scoreless at 0-0. At 13:10 Shaw Boomhower and Sean Allen decided to participate in some extracurricular activities which resulted in five-minute majors. Nicolas Hague brought the building to life with a rocket which gave the Steelheads the 1-0 lead. Ryan McLeod got the lone assist. At 18:21 Brendan Harrogate saw the box for a two-minute high sticking minor. The Generals outshot the Steelheads 10-9 but the home team held a 1-0 lead after the first.

1:41 into the second, Stephen Gibson put the Steelheads penalty kill unit back to work with a cross-checking minor, the Steelheads were able to keep the Generals off the scoresheet by dominating on the PK. At 7:08 Oshawa’s Eric Henderson gave Steelheads a man-advantage which the Steelheads made use of. Forward Owen Tippett tipped one in past Cole Ceci extending the lead to 2-0, the assists went to Nicolas Hague and Ryan McLeod. Right after the second goal Oshawa went back to the box, Renars Krastenbergs received a holding minor but the Generals were able to capitalize shorthanded with Jack Studnicka getting one past Jacob Ingham to cut the lead down to one. The parade to the penalty box continued with Michael Little receiving a slashing minor giving the Generals another power play opportunity. Jacob Moverare was next to the box with a hooking minor. The Steelheads continued to dominate on the penalty kill without letting anything by them. In the final moments of the second frame, Oshawa’s Eric Henderson saw the back of the net tying the game at two apiece, the single assist to Domenico Commisso. With five seconds remaining in the second frame Nicolas Hague received a cross-checking minor putting the Generals back on the power play. Oshawa outshot the Steelheads 9-4 in the second and the score was even at 2-2.

58 seconds into the third and final frame, Oshawa’s Allan McShane paraded to the box which gave the fans some 4 on 4 actions for 55 seconds. At 7:01 Oshawa’s Mitchell Brewer received a holding minor giving the Steelheads another powerplay. Michael McLeod and friends went to work on the power play and Owen Tippett set Michael McLeod up perfectly for his first goal following his return from the NHL. Ryan McLeod picked up the secondary assist. At 11:34 Michael Little received a two-minute minor for a check to the head. The power play unit continued to dominate as no goals were scored. With time winding down, Cole Ceci was pulled giving the Generals an extra body, but Trent Fox capitalized and scored on the empty net to seal a 4-2 win for the Steelheads.

The Steellheads are back in action on Sunday afternoon to take on the Niagara IceDogs for a 2 PM start.