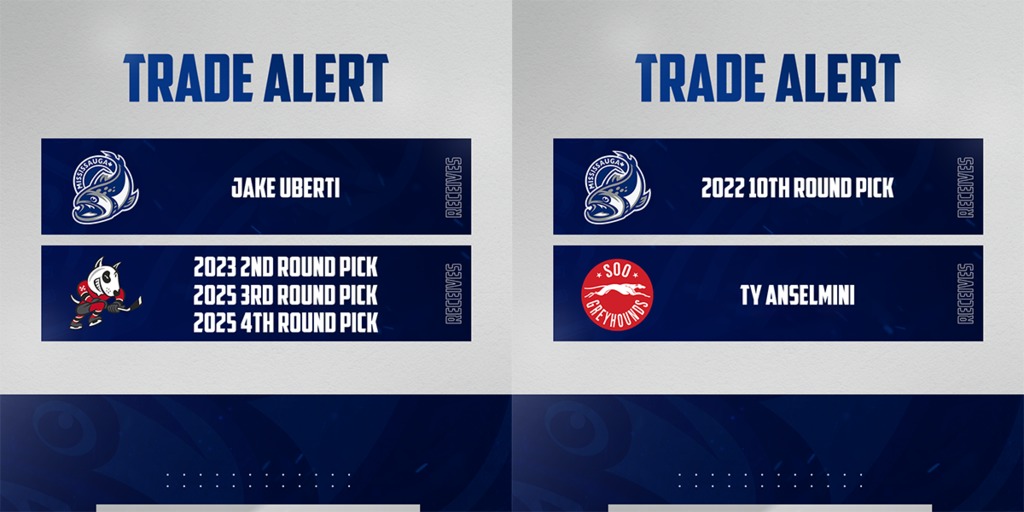 MISSISSAUGA, ON – The Mississauga Steelheads made a couple of moves before the January 10 trade deadline to bolster their current and future lineups.

On January 9, the Steelheads completed a trade with the Niagara IceDogs, receiving forward Jake Uberti in exchange for a 2023 2nd round pick, and 3rd and 4th round picks in 2025. Uberti, 19, has played three previous seasons with the IceDogs and earned the assistant captain title with the team in 2021. This season, Uberti scored 16 points (7G, 9A) in 22 games, making him fifth in scoring for IceDogs.

Uberti made his Steelheads debut against the Peterborough Petes just hours after being traded. On the starting line with James Hardie and Luca DelBelBelluz, the 6’2 forward made his presence known. In the 5-2 win, Uberti earned his first two points as a Steelhead on a secondary assist and an empty-net goal to seal the team’s victory.

“We would like to welcome Jake and the entire Uberti family to the Steelheads,” said Head Coach and General Manager, James Richmond, “Jake is a big skilled player that plays with the pace we like. Jake will be used on the wing and can play centre as well. He’s a player our scouts liked in his U16 season and has developed into a very good OHLer. We are confident that Jake will make our Team stronger as we head into the second half of the season as we compete for a playoff spot.”

We thank Ty Anselmini for all he has done with the Mississauga Steelheads this season and wish him the best of luck with the Soo Greyhounds!