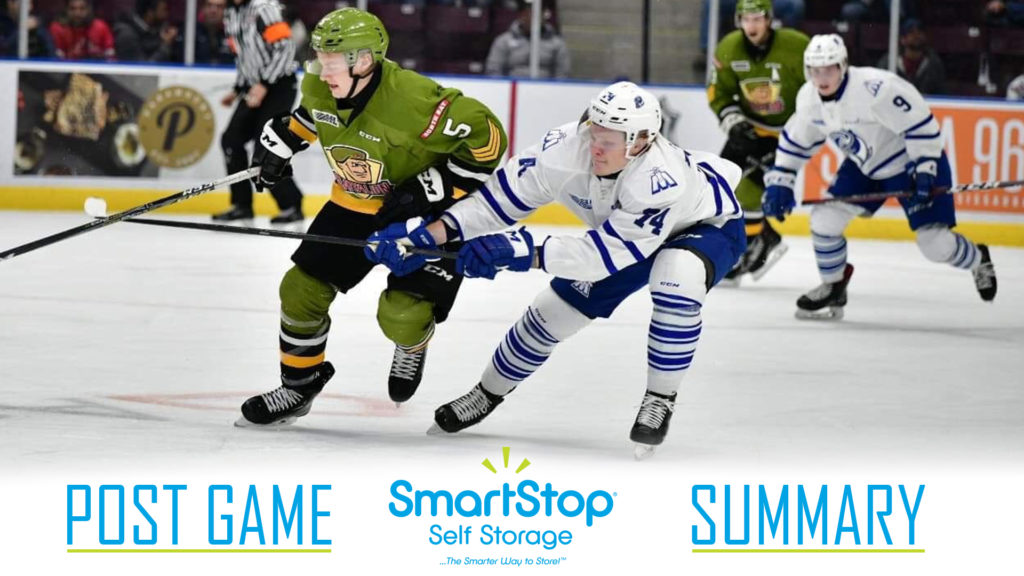 Hoping to bounce back from last night’s 7-4 loss against the London Knights, the Mississauga Steelheads were back at home Friday night to take on the North Bay Battalion for their second of three games in three nights. Both goalies faced over 40 shots in this game, but it was the Battalion who were able to get the jump with an early three goal lead that the Steelheads just couldn’t recover from.

It was an exciting first period with a lot of scoring chances, but the puck luck seemed to tilt in the favour of the North Bay Battalion. Steelheads’ rookie netminder, Joe Ranger was able to make two big stops early on, but the Battalion’s top line came out firing. Justin Brazeau, Brad Chenier, and Adam McMaster all recorded a goal and two assists and the Battalion took an early  3-0 lead in the first. The Steelheads did not have luck on their side as Ryan Wells and Isaac Walker, both of whom are looking for their first career OHL goals, hit the post on open looks. With just 1:16 to go in the period, Adam Varga escaped his defender and got the Steelheads on the board with his second goal of the year. The Battalion held a 3-1 lead heading into the first intermission.

After a high scoring first period, the second period had an equal amount of opportunities but only one goal. The Steelheads outshot the Battalion in the period 13-9 but couldn’t find the back of the net as Christian Propp stopped all the shots he faced in the frame. The Battalion were able to get their three goal lead back on a strange goal by Luke Moncada. The puck seemed to be covered by Ranger, but Moncada, standing in the crease, got it out from under Ranger’s glove and in the net. The Steelheads were down 4-1 after 40 minutes of play.

The Steelheads started the third period on the power play, but couldn’t capitalize early on in the frame. They were able to beat Battalion netminder Propp on a deflected Thomas Harley shot seven minutes into the period. Harley’s fourth goal of the season brought the Steelheads within two goals. Unfortunately, the Steelheads power play just wasn’t clicking tonight and almost 14 minutes into the period, Brad Chenier was able to score his second goal of the night shorthanded and restore the Battalion’s three goal lead. Battalion win 5-2.

“You have those games… the puck luck just wasn’t there. You have to forget about it, get on the bus tomorrow and try to get a win” said coach James Richmond as The Steelheads head to Sudbury tomorrow night to take on the Wolves for their third game in three nights. The Steelheads are back at home on Friday, November 30th when the Hamilton Bulldogs come to visit.