Otters propel ahead of Steelheads 7-4 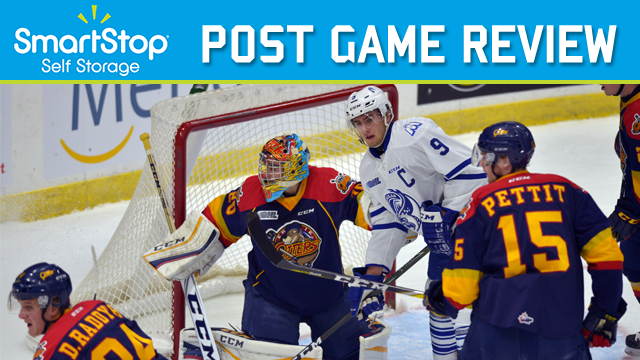 The Steelheads returned to action on home ice, for the first time since October 23, to take on the Erie Otters. With Alex DeBrincat slipping one goal ahead of Owen Tippett for the OHL lead, all eyes were on Erie’s #12 and Mississauga’s #74 to see the showdown between the two powerhouse forwards.

The first period started off in the blink of an eye, as Tippett fired off an unassisted rocket past Otters’ goalie, Jake Lawr. This goal would tie him with DeBrincat for the time being, at 14 goals this season. At 1:37, Brendan Harrogate extended the lead from an assist by Jake Ramalho and Austin Osmanski. Halfway through the period there was a visible momentum shift, and a holding penalty against Marcus Dickerson allowed Erie to get on the board. After five shots in a row from the Otters, Kyle Pettit scored his first of the game off an assist by DeBrincat and Kyle Maksimovich at 10:43. Three minutes later, Pettit scored his second of the game, assisted by the Raddysh brothers, Darren and Tyler to tie the game. Nathan Bastian got the crowd on their feet, finishing off a stellar pass from Ryan McLeod to close out the frame 3-2.

Erie made a goalie change to start the second, pulling Jake Lawr in favour of Troy Timpano, and while not as quick as Tippett’s, Erie did net an early goal. 54 seconds in, the shot from Taylor Raddysh, assisted by Gera Poddubnyi and Kyle Maksimovich, tied the game 3-3. At 1:41 Stefan LeBlanc was sent to the box which opened the door for Erie to nudge ahead of Mississauga. Darren Raddysh would score the power play goal, assisted by brother Taylor, and DeBrincat. With his second of the night, and 15th of the season, Tippett netted one in at 5:50 and slid into the OHL goal leader spot. DeBrincat responded in a big way, and scored the game winning goal for Erie at 9:21, assisted by the Raddysh brothers. Erie’s insurance goal came at 14:01 from Christian Girhiny, assisted by T.J. Fergus and Ivan Lodnia. Lodnia would claim a goal of his own less than two minutes later from Girhiny and Darren Raddysh. After the seventh goal, Mancina was pulled and Joseph Murdaca took his place between the pipes. Murdaca would be tested early and often, stopping all thirteen shots he saw in the period.

The final period saw Murdaca under fire again after a penalty for too many men was called.  As the teams traded shots back and forth, it looked like Mississauga would sink their fifth. A two-on-one between Michael McLeod and Tippett, had fans on their feet, but the shot just missed the net. Seconds later Tippett would drive to the net again, but was not able to stay on his feet and Erie cleared it. The star of this frame was Murdaca, after he faced three power plays and nine shots from Erie, denying them all. The third would remain goal-less as Erie took this game 7-4. While the Steelheads couldn’t put this game in the win column, they definitely fought hard for their fans.

The Steelheads will hit the road this weekend to take on the Sudbury Wolves on Saturday and the North Bay Battalion on Sunday. You can catch these two, and all away games on Rogers TV. Be sure to follow us on Twitter, Facebook, and Instagram to stay up to date with all things Steelheads.