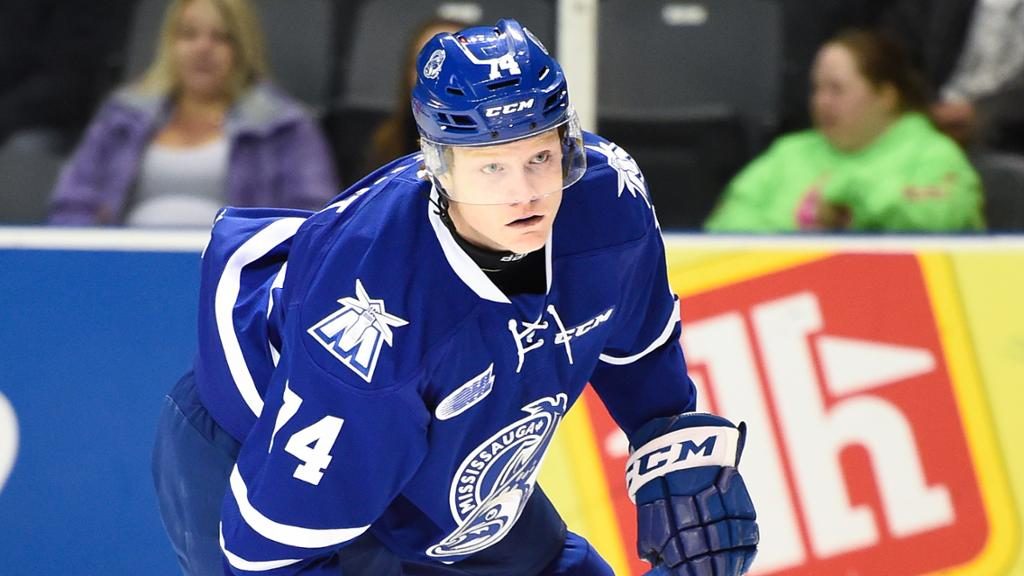 Mississauga right wing Owen Tippett has a lot of respect for Winnipeg Jets rookie forward Patrik Laine for the way he was able to utilize his shot to succeed in his first NHL season. To Tippett, what was most impressive was how Laine was able to produce consistently, with 64 points (36 goals, 28 assists) in 73 games, even when the opposition knew what was coming.

“It was amazing to me how he could score all those goals from the outside,” Tippett said. “A goal scorer is something you dream about becoming in the NHL.”

Tippett (6-foot, 200 pounds) might not have the velocity on his shot that Laine does at this stage in his career, but he does have a lot going for him. Including arguably the best shot of any player in the 2017 NHL Draft class.

“He’s got a great release of the puck, and it’s only going to get better when his body matures up top,” Mississauga coach James Richmond said. “He can wire the puck and do it from tight areas. He’s able to change the angle of his stick, much like Laine does, and it’s very difficult for a goalie to pick up the puck.”

Tippett, No. 7 on NHL Central Scouting’s final ranking of North American skaters. In their latest mock drafts, two NHL.com draft experts predict Tippett will be picked No. 6 by the Vegas Golden Knights, while another believes he will go No. 8 to the Buffalo Sabres.

In addition to Tippett’s dynamic shot, he’s also considered one of the best skaters in this year’s class.

“He’s a natural goal scorer who is extremely dangerous when attacking with speed,” Matt Ryan of NHL Central Scouting said. “He possesses an excellent release while also displaying the vision and passing ability to create offense for his teammates, making him very difficult to defend.”

The best NHL comparison for Tippett has been Pittsburgh Penguins forward Phil Kessel.

“I would say that my shot is what sets me apart from other prospects,” Tippett said. “Shooting the puck is something I’ve always worked on, whether in the driveway or an outdoor rink. I like to use that shot to an advantage, and I’m always looking for those fast breaks because I know if I get a step on a guy I’ll be able to go by them. I like to get pucks to the net.”

Tippett was recognized as having the best shot and being the most dangerous player in the goal area in a poll of coaches from the Eastern Conference of the Ontario Hockey League. What also makes Tippett an intriguing prospect is that he can play either wing, something he did with regularity this season.

“He can play right or left depending on who we’re playing against,” Richmond said. “Depending on what [defense] pairing he’s up against, he’ll play either side on a shift. To me, lines are like a puzzle and you never want the same size pieces on a particular line. [Tippett] brings great speed and he’s a right-hand shot who can get down left wing and cut to the net really well.

“Not a lot of right wings can cut in off left wing; they usually cut high and try to shoot early. But Owen can get to the net.” 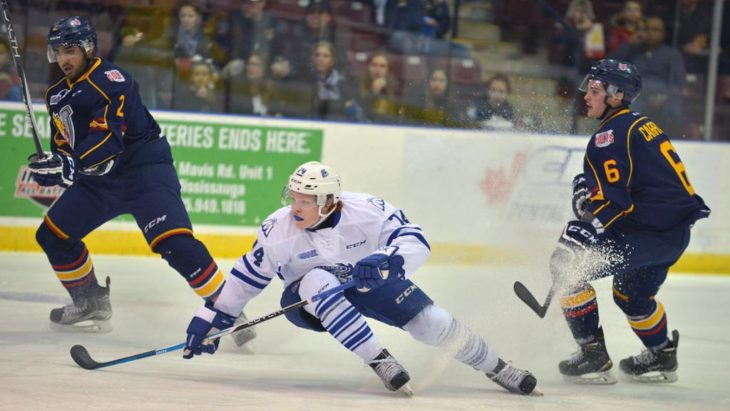 “I do like playing my off-wing,” Tippett said. “I’ve played much of the season with [New Jersey Devils prospect] Nathan Bastian as my center. It’s been good. We cycle the puck low, get pucks to the net and use each other in the zone to make plays happen.”

If there’s one part of his game Tippett knows he can improve it would be his play in the defensive zone, something Richmond and the coaching staff have focused on with him during practice sessions.

“He just needs to be a little more consistent on the defensive half wall, much like any junior player his age,” Richmond said.

Said Tippett: “I know I need to improve with being more aware in my defensive zone, and it’s something I’m determined to work on and do.”

Tippett said he’s looking forward to the NHL Draft at United Center in Chicago on June 23-24.

“It’s something I’ve always dreamed of but never thought would come true. But it’s happening,” he said. “At the end of the day I’m just going to play my game and the rest will fall into place.”