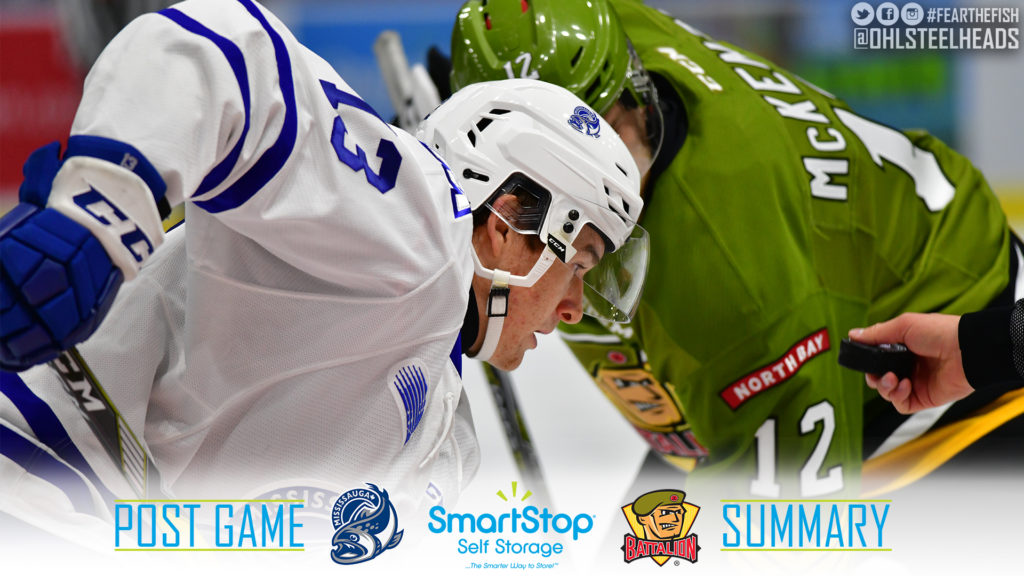 Looking to get out of a six game losing slump, the Steelheads travelled to North Bay for a Thursday night central division tilt with the Battalion. These two teams last met on October 20th in Mississauga, where the Steelheads took home the two points in a convincing 7-1 win.

The first period was fairly even and uneventful, with each team managing only five shots on goal.

Frustrated by the slow start to the game, the Steelheads picked things up a bit to start the second period. At 8:05, Owen Tippett would get his team on the board after knocking down a clearing attempt at the blue line before going top shelf on Propp with a beautiful backhand shot. Tippett’s sixth of the season was unassisted. Minutes later, Jacob Moverare extended the Steelheads’ lead to 2-0 as Trent Fox provided a screen that allowed Moverare’s shot to beat Propp. At 14:36, Nicholas Canade was called for cross checking, giving the Battalion an opportunity on the man-advantage. The home team made the Steelheads’ pay as Andy Baker cut the deficit to make it 2-1 heading into the second intermission. Riley Bruce and Cam Dineen assisted on Baker’s fifth of the season. The Steelheads outshot the Battalion 11-9 in the middle frame.

The Battalion struck quickly in the third as Justin Brazeau beat Ingham just 26 seconds into the period. Luke Burghardt assisted on Brazeau’s 19th of the season. Penalty trouble would cost the Steelheads again as the Battalion added two power play goals from Cam Dineen at 8:51, and Justin Brazeau, his second of the night, at 16:05. With time winding down and the Steelheads trailing by two, Jacob Ingham left the crease in favour of a sixth skater. The Steelheads were able to convert with the extra attacker as Nic Hague fired a shot past Propp to bring his team within one. Albert Michnac and Michael McLeod assisted on Hague’s 17th of the season. That would do it for the scoring however as time ran out and the Battalion picked up the two points with a 4-3 win.

The Steelheads will be back in action tomorrow night to host the Barrie Colts at the Hershey Centre for a 7PM start.