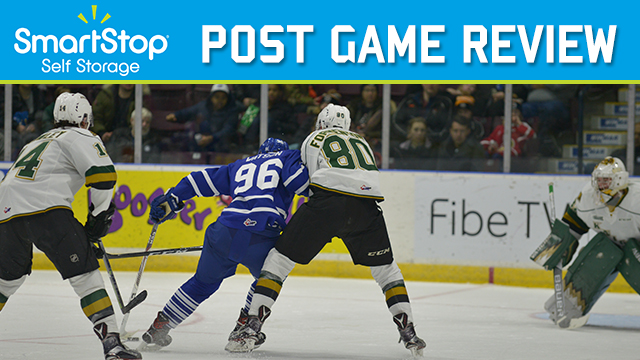 After a tough loss in overtime on Friday against the Barrie Colts, the Steelheads hoped to bounce back today with a win in a cross-conference matchup against the London Knights. The Trout last met with the Knights on December 9th, a game that saw Owen Tippett score two goals, and Spencer Watson pick up a hat trick. Misisssauga took that game by a final score of 7-3.

The first period started off with a penalty awarded to both sides at 5:09 to make it 4 on 4. The penalties went to Nicolas Hague and Alex Formenton, two minutes each for roughing. Exactly two minutes later, at 7:09, Stefan Leblanc would take a cross-checking penalty which put the Steelheads down a man, but the Trout do their job and kill the penalty without any damage done. The game remained scoreless after the first period of play. Shots on goal were 18-6 in favour of London.

Early in the middle frame, Montreal Canadiens prospect, Victor Mete would sit for two on a tripping call, opening the door for a Steelheads’ power play goal from Hague. Mikey McLeod and Spencer Watson picked up the assists on the opening goal, and Hague’s 14th of the season. Penalty trouble would hurt the Knights again at 16:03 as the Steelheads capitalized on the man-advantage with another power play goal. Owen Tippett netted his 32nd of the season, assisted by Nathan Bastian and Vili Saarijarvi. The Steelheads’ special teams weren’t done there either, adding another power play goal, this one from Nathan Bastian. Assists on Bastian’s 11th of the season went to Jacob Moverare and Owen Tippett, giving the Steelheads a three-goal lead heading into the second intermission. Shots on goal in the second were 15-18 in favour of Mississauga.

Knights’ goaltender Tyler Johnson would enter the game in the third period, relieving Jordan Kooy. At 8:22 Stefan Leblanc is then called for tripping and is sent to the box. Around the half-way mark of the frame, the Knights were able to solve Mancina and get on the board with a power play goal from Cliff Pu. Robert Thomas and Olli Juolevi had the assists on Pu’s 26th of the season. With time winding down, and the Steelheads up 3-1, the Knights pulled Johnson in favour of an extra attacker. Mikey McLeod set up Owen Tippett for the empty-netter to seal a 4-1 victory for Mississauga. Spencer Watson picked up the extra assist on Tippett’s 33rd of the season. Tippett is now tied with Dylan Smoskowitz for the Steelheads’ franchise record for most goals in a season. Matthew Mancina earned first star honours, stopping 40 of 41 shots faced today.

Your Steelheads kick off a road trip Thursday to face off against the North Bay Battalion. Puck drop will be at 7:00 pm. You can catch that game on RogersTV cable 10 in Mississauga. Be sure to follow us on Twitter, Facebook, and Instagram to stay up to date with all things Steelheads.