Rangers come from behind to beat Steelheads in OT 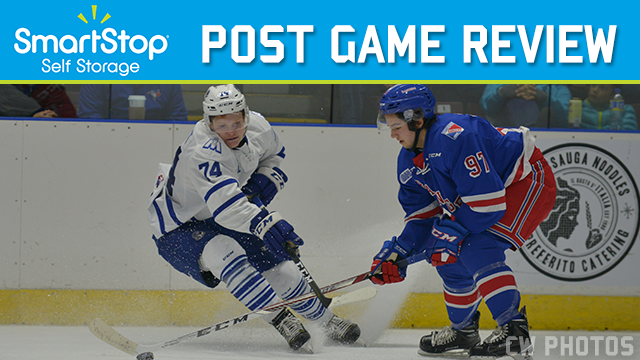 Following an overtime win against the Niagara IceDogs on Friday, the Steelheads looked to keep their momentum strong heading into today’s game. Facing off against the Kitchener Rangers, all eyes were on Owen Tippett, who entered into tonight’s game with 10 goals under his belt so far this season.
The first period did not disappoint as Owen Tippett opened the scoring early, off a beauty pass from captain Michael McLeod at 2:20. The crowd didn’t even have a chance to sit down, as Tippett fired off another goal, thirty-four seconds later for his 12th of the season. Nathan Bastian claimed the assist for Tippett’s second, adding yet another to the New Jersey Devil’s latest signee. While Mississauga started the game strong, Kitchener definitely picked up steam half way through the period. With six solid chances, the Rangers tested Steelheads’ goalie Jacob Ingham, but he held strong denying all shots in the first.

With another twenty minutes on the clock, this period was all about the goalies. Ingham and Rangers tender, Dawson Carty both defended their nets soundly, with the lion’s share of the shots going to Ingham. While both teams were able to lead some promising offensive charges, both goalies denied every single shot.

An early tripping penalty from Stefan LeBlanc, allowed the Rangers to capitalize early in the third. Florida Panther’s draft pick Adam Mascherin fired off a powerplay goal at 0:31, assisted by Dylan Di Perna and Connor Bunnaman. Another Steelheads’ tripping penalty this time from Nicolas Hague, sent the Rangers into their fifth power play. With his second of the game Mascherin tied it for the Rangers at 18:30, off assists from Di Perna and goalie Carty. Shaw Boomhower had a promising chance in the dying seconds of regulation but just could not find the back of the net.

Hoping to net another 3-on-3 overtime win, the Steelheads charged the net hard. Unfortunately for the Trout, Jeremy Bracco picked off a pass for the breakaway. While Ingham was able to save the initial shot, Bracco was able to nudge one in the five hole to give the Rangers a road win.
The Steelheads will be hitting the road for their next game on Friday, October 28 to face off against the Sarnia Sting. This game, and all away games, can be watched on Rogers TV. Be sure to follow us on Twitter, Facebook, and Instagram to stay up to date with all things Steelheads.