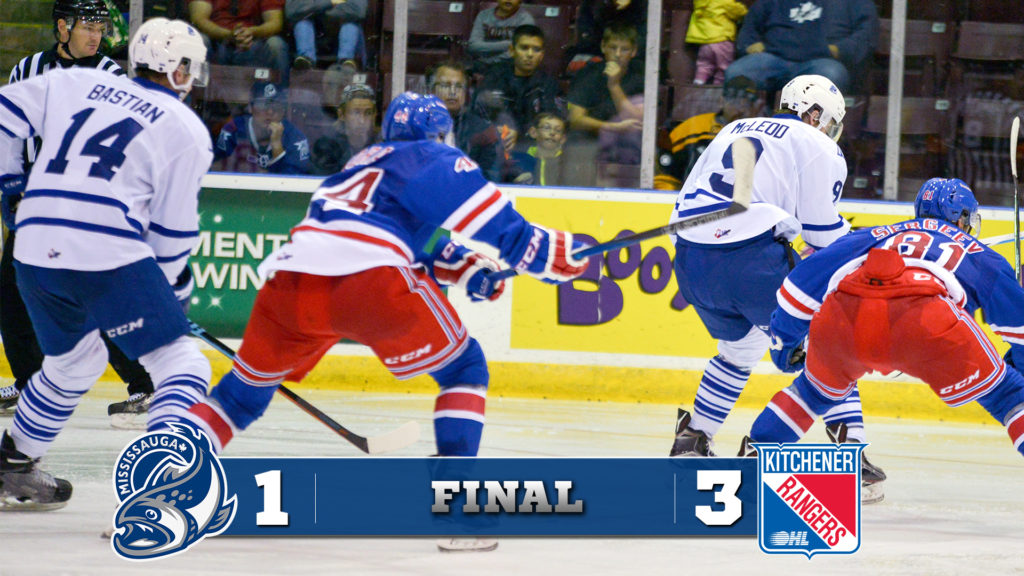 Preseason action continued Wednesday night as the Mississauga Steelheads hosted the Kitchener Rangers in front of a crowd of 575 at the Mattamy Athletic Centre. The Steelheads were looking to bounce back from a 5-1 loss to the Rangers on Sunday, but came up short as Ryan McLeod scored the lone goal again in a 3-1 final.

Similar to Sunday, tonight’s game saw each team take a number of penalties, however the goaltenders were the story tonight as Chris McGonigle and Jacob Ingham put on a show, making a number of impressive saves throughout the game. McGonigle stopped 31 of the 32 shots he faced, while Ingham allowed three goals on 27 shots, earning third star honours. The first period saw both teams take a number of penalties, the lion’s share going to the Steelheads. Kitchener’s Nick McHugh fired a one-timer passed Ingham to open the scoring at 15:33. Adam Mascherin picked up the assist on the opening goal as Kitchener held 1-0 lead heading into the first intermission.
Much like the first, the middle frame saw both teams trading penalties back and forth. The Rangers struck again at 16:09, moments after a Steelheads penalty had expired. The Rangers second goal, and eventual game winner, came from Connor Bunnaman, assisted by Frank Hora and Joseph Garreffa. A late penalty from Jake O’Donnell sent the Steelheads short-handed into the third, trailing the Rangers 2-0.

Kitchener started the third off with a bang, capitalizing on a 5-on-3 just 1:01 into the period with a goal from Adam Mascherin, assisted by Cedric Schiemenz and Elijah Roberts. Ryan McLeod stole McGonigle’s shut out hopes with a goal assisted by Owen Tippett and big brother, Mike McLeod to close the gap 3-1. Mississauga turned on the jets in the last five minutes, seeing a heartbreaker crossbar shot from Owen Tippett. Looking to make one final push with time winding down, Mississauga called a timeout at 19:50, pulling Ingham in favour of an extra attacker. Despite a number of chances, the Steelheads were unable to complete the comeback as they fired one last shot on net as the final buzzer sounded.

The Steelheads will head to the Sleeman Centre on Friday to take on the Guelph Storm at 7:30 PM before returning home to Mississauga to host the Storm on Sunday.