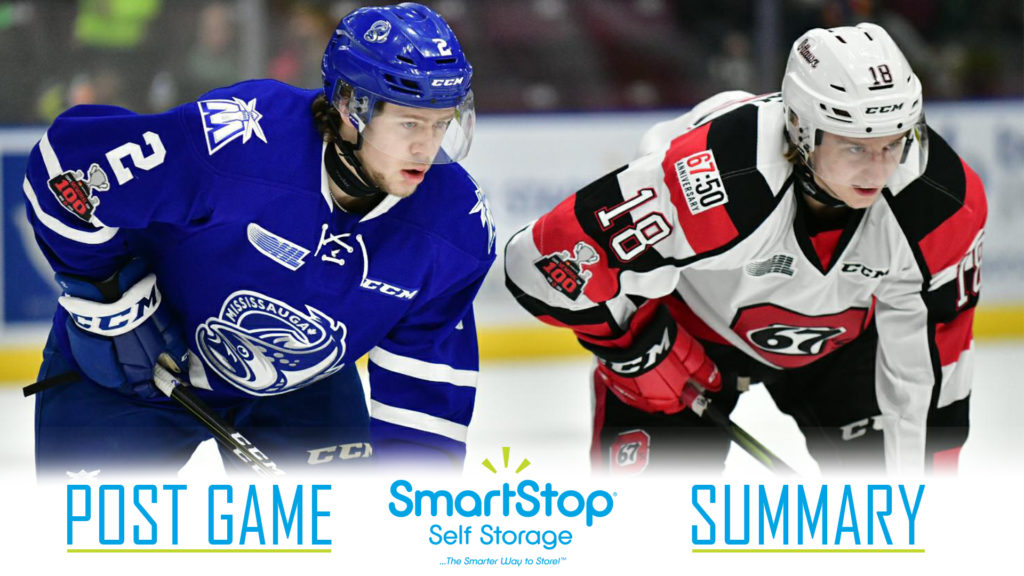 The Mississauga Steelheads kicked off their 2018 regular season Friday with a trip to the Nation’s Capital to take on the Ottawa 67’s. Last season, the Steelheads and 67’s split their four meetings 2-2-0-0. Over the past five years the Steelheads have faired pretty well in Ottawa, posting a 5-3-0-0 record when visiting the TD Place Arena.

Things got off to a bit of a slow start as an early delay due to fog and poor visibility saw things come to an abrupt halt. After a 15-minute break, the fog lifted and the game resumed. The 67’s struck first as Tye Felhaber notched his first of the season to give the home team a 1-0 lead. The Steelheads were quick to respond as Filip Reisnecker put home his first OHL career goal to even the score 1-1. Nicholas Canade and Michael Little assisted on Reisnecker’s first of the season. The Steelheads outshot the 67’s 12-6 in the opening frame and the game sat tied at 1-1 heading into the first intermission.

Approaching the halfway mark of the game, Graeme Clarke restored Ottawa’s lead from Austen Keating. Again, the Steelheads responded quickly as rookie James Hardie buried a deflection that came awkwardly off the boards for his first OHL career goal. William Portokalis assisted on the goal, earning his first OHL point. Minutes later, the 67’s took the lead again as Mitchell Hoelscher beat Ingham to put Ottawa up 3-2. Late in the frame, former Steelheads’ defenceman Merrick Rippon would head to the box to serve two minutes for roughing. The late penalty meant the Steelheads would start the third on a man-advantage. The Steelheads outshot the 67’s 13-9 in the middle frame and trailed by 1 heading into the second intermission.

The Steelheads had the lone goal in the final frame as Richard Whittaker deflected a point shot from Ryan Barbosa to even the score 3-3. The 67’s converted quickly during the 3-on-3 overtime period as Austen Keating put the game winning goal past Ingham for a 4-3 final.

The Steelheads return to action this Sunday, September 23 to host their central division rivals, the Niagara IceDogs at the Paramount Fine Foods Centre. Puck drops at 2PM and the first 2,000 fans will receive a free magnet schedule courtesy of Paramount Fine Foods. Tickets.