Road to the Draft: Austin Osmanski 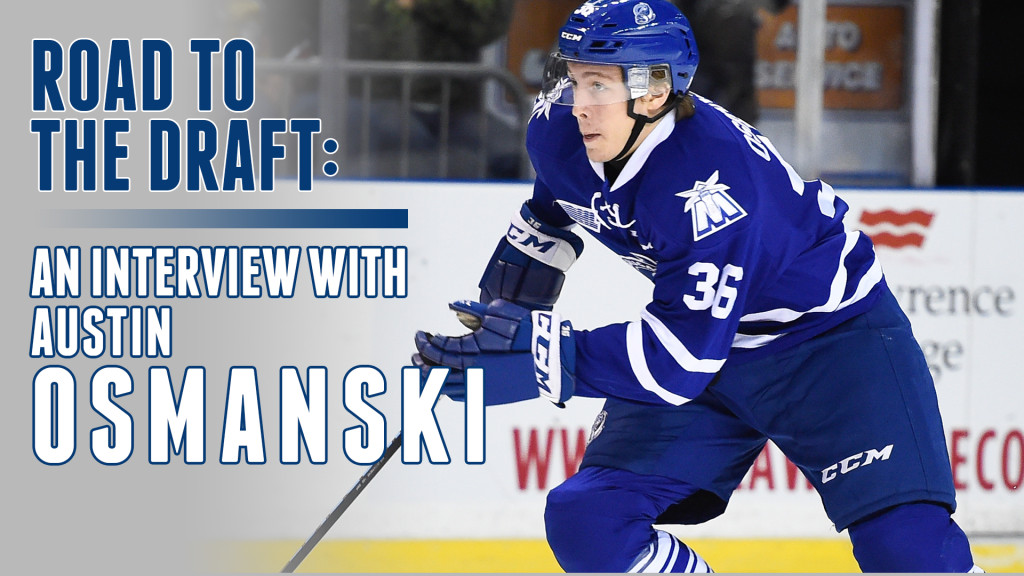 NHL Draft week is finally upon us, so what better way to celebrate than with an exclusive interview from Mississauga Steelheads draft eligible defenceman, Austin Osmanski.

We sat down with Austin to talk all things hockey, draft and NHL.

Q: Are you excited for the draft?

Absolutely, I think it’s something you dream about when you’re growing up and with it being in my hometown that makes it pretty special.

Q: How does it feel to know that your dream could become a reality?

You just gave me chills for a second there. Honestly, I think it’s sometimes hard to fathom. There’s still a lot of hard work to be done. Whether or not you get drafted it doesn’t really change much; you still have to put in the work. It’ll just be nice to get some recognition, that’s all the draft really is.

Q: What kind of training have you been doing during the off-season to prepare?

I train at the HarborCenter in downtown Buffalo which is connected to the First Niagara Center where the Sabres play. Five days a week I’m in the gym and three days a week I’m training with on-ice professionals, along with some other college and NHL signed guys. I’m skating whenever I can.

Q: Who would you say has been your biggest supporter in your hockey career?

It’s hard to pick just one, but I’d have to say I have the most supportive family one can ask for. Definitely my parents and my brothers – my younger brother’s Instagram accounts are strictly pictures of me and I don’t know if they are using to me to get some followers or what, but my entire family has been my biggest support system.

Q: Who was your favourite NHL player growing up?

Obviously Patrick Kane, he’s from Buffalo and my uncle grew up with him and played with him – they’re the same age. I have a big Fathead of him in my room. But now, I’d have to say it’s his teammate Niklas Hjalmarsson who plays for the Blackhawks.

Q: As a player, what qualities do you have that make you stand out to scouts and teams?

I’d like to say my pure defenceman style. I’m not really the guy that is going to go end-to-end or do the flashy Nylander plays. I’m more of a guy that’s worried about stopping

the other team, using my stick to break up plays and my big body to remind them that I’m there.

Q: If there was one thing you could improve on, what would it be?

I mean, you can always improve on everything. Right now, it’s just to get stronger overall. Skating is my main focus so I can keep up with the team’s top lines and eventually push it to the next level and get to be a good skater. If you can be big and skate, that’s something you can’t teach and I’ve been lucky to be tall so if I can figure out the skating I think I’ll be in good shape.