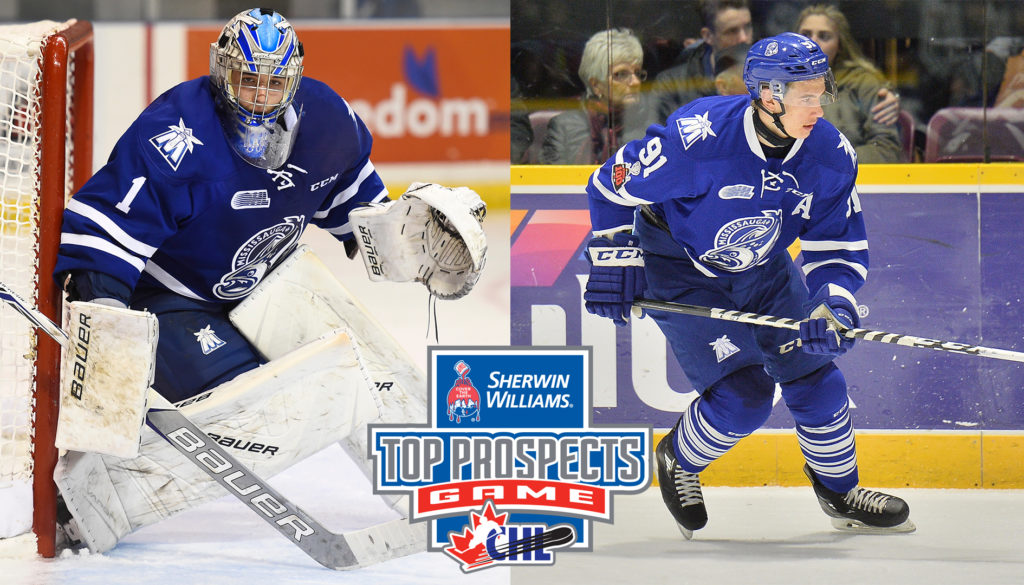 Toronto, ON – The Canadian Hockey League in association with the host Guelph Storm Hockey Club, and title partner Sherwin-Williams, today announced the 40 players that will compete in the 2018 Sherwin-Williams CHL/NHL Top Prospects Game at Sleeman Centre on Thursday January 25, 2018.

40 players from across the Ontario Hockey League, Quebec Major Junior Hockey League, and Western Hockey League will compete in the 23rd annual showcase of the CHL’s top prospects eligible for the NHL Draft.  The 40 CHL players competing in the game were chosen by all 31 NHL clubs and were divided into teams by NHL Central Scouting. 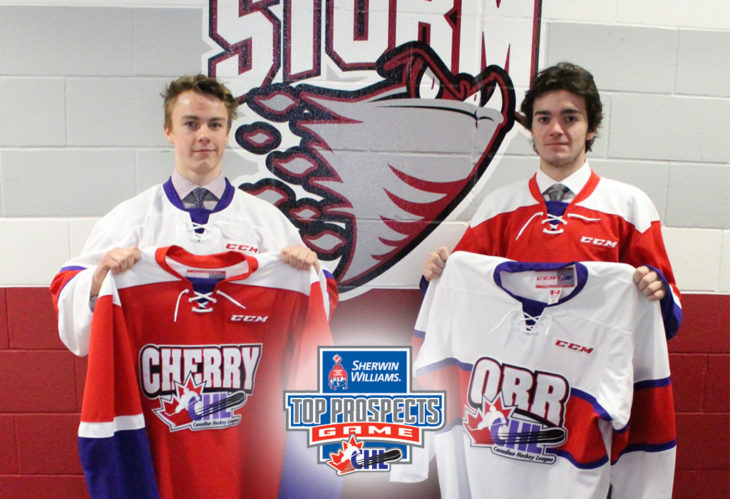 “One of the highlights of the hockey season undoubtedly is the Sherwin-Williams CHL/NHL Top Prospects Game which has been a fixture on the CHL event calendar since 1996,” said CHL President David Branch. “It’s a truly special experience for the players assembled from across the CHL who have the opportunity to showcase their skills before hundreds of NHL scouts and general managers in attendance in addition to the passionate hockey fans in Guelph and for a nationwide audience watching live on Sportsnet and TVA Sports.”

The rosters include all 16 CHL players who received ‘A’ ratings by NHL Central Scouting in their November ‘Players to Watch’ list which features eight projected first round forwards and eight top ranked defencemen.  The forwards include the likes of Andrei Svechnikov of the Barrie Colts, Joe Veleno of the Saint John Sea Dogs, Barrett Hayton of the Sault Ste. Marie Greyhounds, Ryan McLeod of the Mississauga Steelheads, Serron Noel of the Oshawa Generals, Akil Thomas of the Niagara IceDogs, plus Filip Zadina and Benoit-Olivier Groulx of the Halifax Mooseheads.  Ryan Merkley of the host Storm headlines the defence that also includes Ty Smith of the Spokane Chiefs, Noah Dobson of the Acadie-Bathurst Titan, Evan Bouchard of the London Knights, Alexander Alexeyev of the Red Deer Rebels, Jett Woo of the Moose Jaw Warriors, plus the Mooseheads’ Jared McIsaac and the Greyhounds’ Rasmus Sandin.

“As the Official Paint of the CHL, Sherwin-Williams is proud to sponsor the 2018 Sherwin-Williams CHL/NHL Top Prospects Game,” said Lee Diamond, President and General Manager, Sherwin-Williams. “We take great pride in making a difference in the communities we serve and we look forward to celebrating this exciting event alongside these talented players, their families and the fans across Canada.”

“Best-on-best competition is a valuable way to evaluate talent and that’s exactly what the Sherwin-Williams CHL/NHL Top Prospects Game provides,” said NHL Central Scouting Director Dan Marr. “NHL scouts and general managers will have the unique opportunity to see many of the top CHL players for the 2018 NHL Draft showcase their abilities in a competitive environment.”

All 14 CHL players chosen in the first round of the 2017 NHL Draft competed in last year’s game played in Quebec including first overall pick Nico Hischier of the Halifax Mooseheads who captained Team Orr opposite Team Cherry who was led by captain Nolan Patrick of the Brandon Wheat Kings selected second overall in June.  In 22 years, a total of 307 CHL players from this event have been chosen by NHL clubs in the first round of the NHL Draft representing close to 47% of all players selected.  Since the event was first introduced in 1996 the game has featured 14 players selected with the first overall pick in the NHL Draft including Hischier, Connor McDavid, Aaron Ekblad, Nathan MacKinnon, Ryan Nugent-Hopkins, Taylor Hall, John Tavares, Steven Stamkos, Patrick Kane, Marc-Andre Fleury, Rick Nash, Vincent Lecavalier, Joe Thornton, and Chris Phillips.

Team Cherry and Team Orr will be assigned at a later date with coaching staffs along with captains and alternates still to be announced.

The 2018 Sherwin-Williams CHL/NHL Top Prospects Game is proudly supported by title partner Sherwin-Williams, and CHL associate sponsors CIBC and Cooper Tires.  The game will be broadcast live on Sportsnet and TVA Sports.

Tickets are still available through the box office at 1-519-837-9690 or visit Ticketmaster to purchase online.

Ask Sherwin-Williams™
For 150 years, Sherwin-Williams has been an industry leader in the development of technologically advanced paint and coatings. As North America’s largest specialty retailer of paint and painting supplies, Sherwin-Williams is dedicated to supporting both do-it-yourselfers and painting professionals with exceptional and exclusive products, resources to make confident colour selections and expert, personalized service at its more than 4,000 neighbourhood stores. For more information, visit sherwin-williams.ca. Join Sherwin-Williams on Facebook, Twitter, Pinterest, Instagram, LinkedIn and Tumblr.