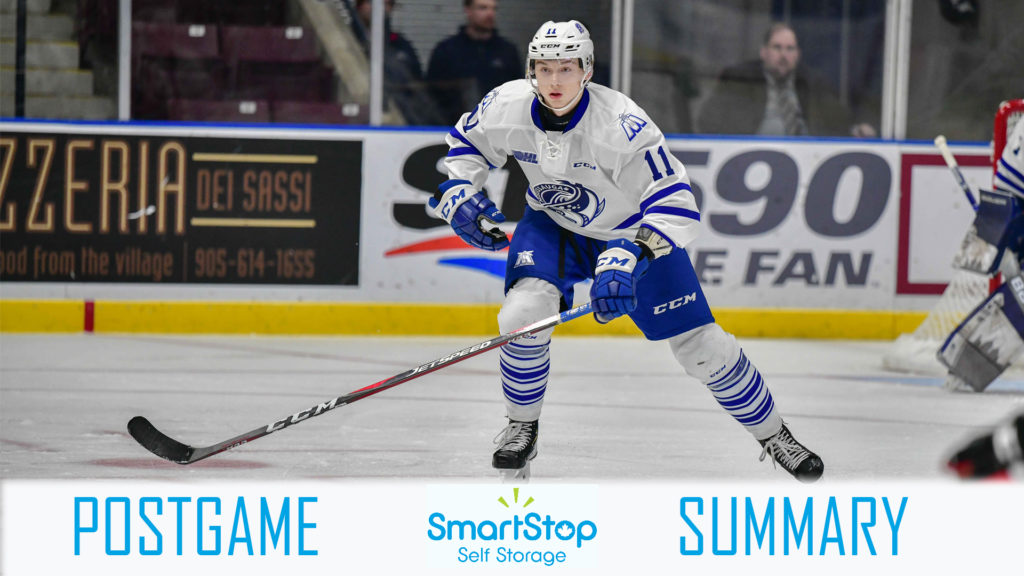 Mississauga, ON – The Mississauga Steelheads took on the Oshawa Generals for their third consecutive home game to start the season on Friday night.

The Fish were bolstered by the return of Dallas Stars draft pick Thomas Harley, who was a late addition to the lineup. Oshawa opened the scoring on the powerplay a few minutes into the game, as Danil Antropov found Brett Neuman on a cross-slot pass who put one past Joe Ranger. Not too long after, Oshawa increased their lead to two as Allan McShane found the back of the net. Oshawa defenceman Giovanni Vallati was handed a 5-minute major and game misconduct for a check to the head, and a Lleyton Moore slashing penalty had the Steelheads heading into the intermission on the powerplay.

The Steelheads did not waste any time getting the offense going in the second period. Richard Whittaker found Keean Washkurak in the slot, who made no mistake beating goaltender Andrew MacLean to cut the Generals lead in half. However, Oshawa was quick to answer back as McShane put one past the Steelheads netminder for his second of the game. Mississauga would continue to put on the offensive pressure, with Duncan Penman scoring on a blast from the point and Harley finding Schwindt for a one-timer to tie the game at 3. Oshawa would add one more, as Oliver Suni fired a wrist shot from the faceoff circle to make the score 4-3 heading into the third.

Oshawa would get off to a quick start at the top of the period, as Brett Harrison ripped a shot over the shoulder of Ranger and Tullio would score on a breakaway to put the Generals up 6-3. The Fish responded quickly, with James Hardie scoring his first of the season and Duncan Penman blasting another shot from the blue line to cut the Generals lead to one goal. Mississauga would battle hard to try and find the equalizer, but ultimately fall to Oshawa by a score of 6-5.

Following the game, defenceman Thomas Harley had the following to say “I watched both of our games while in Dallas and we weren’t able to get too much going, so I just wanted to jumpstart that. A lot of the offense didn’t come from me, our forwards were out there doing a great job tonight.”

The Mississauga Steelheads will head on the road for their first away game of the season on Saturday against the Barrie Colts, and return home on October 4th to take on the Hamilton Bulldogs at the Paramount Fine Foods Centre. Tickets can be purchased by visiting the Box Office or by calling 905-502-9100.