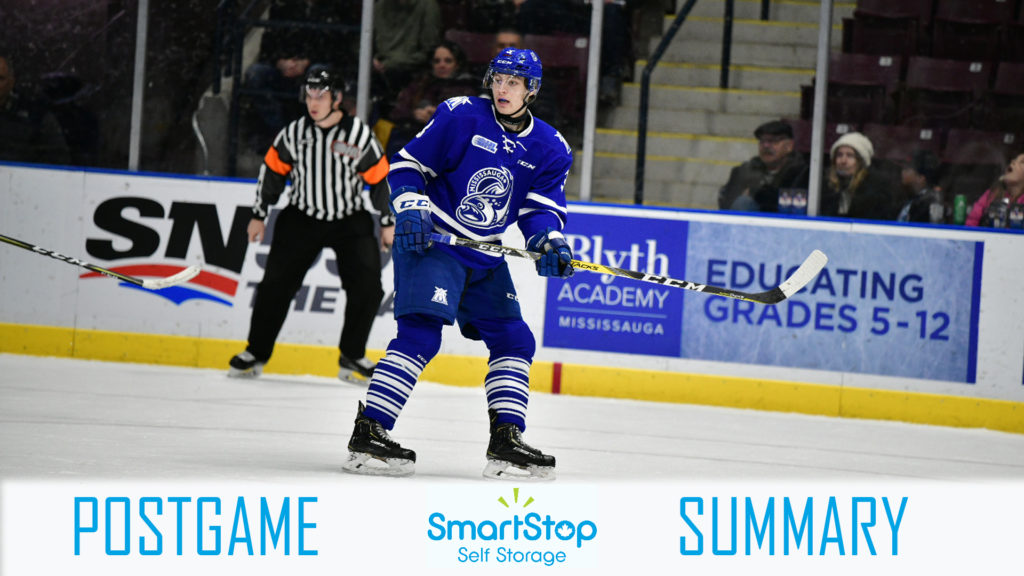 Barrie, ON – The Mississauga Steelheads took on the Barrie Colts on Saturday night in their first road game of the season.

Carolina Hurricanes draft pick Ryan Suzuki opened the scoring in the first period on a turnover from the Steelheads defence. Nathan Allensen added to the lead not too long after, as a wrist shot from the slot beat goaltender Kai Edmonds. With Liam Ham in the box for cross-checking, Tyson Foerster found the back of the net to make it 3-0. Mississauga would head to the dressing room outshooting Barrie 18-10.

The goals kept coming for the Barrie Colts in the second period, as Luke Bignell scored on a breakaway to increase the lead to four.  Tempers started to flare as the physical play ramped up, with both teams seeing the box for multiple penalties. With the play at 4-on-4, Richard Whittaker deflected a point shot from Liam Ham to beat goaltender Arturs Silovs. Thomas Harley cut the lead to 4-2 with a slapshot from the top of the faceoff circle, as the Steelheads continued to push the pace of play heading into the third period.

The Colts struck first in the final frame, as Tyson Foerster beat Kai Edmonds up high for his fourth point of the game (2 goals, 2 assists). The Fish would have a huge opportunity to get back in the contest, as penalties to Brandt Clarke and Christopher Cameron gave them a two-man advantage. Keean Washkurak would make no mistake, beating Silovs five-hole to make the score 5-3. Barrie would answer back, as Jason Wilms scored a powerplay goal and Tyson Forester completed his hat-trick to extend the lead to 4.

The Steelheads will return home on Friday, October 4th against the Hamilton Bulldogs as a lucky fan will have the chance to win a vacation to Fort Lauderdale, Toronto or Quebec City presented by Hilton. Tickets can be purchased by visiting the Box Office or by calling 905-502-9100.