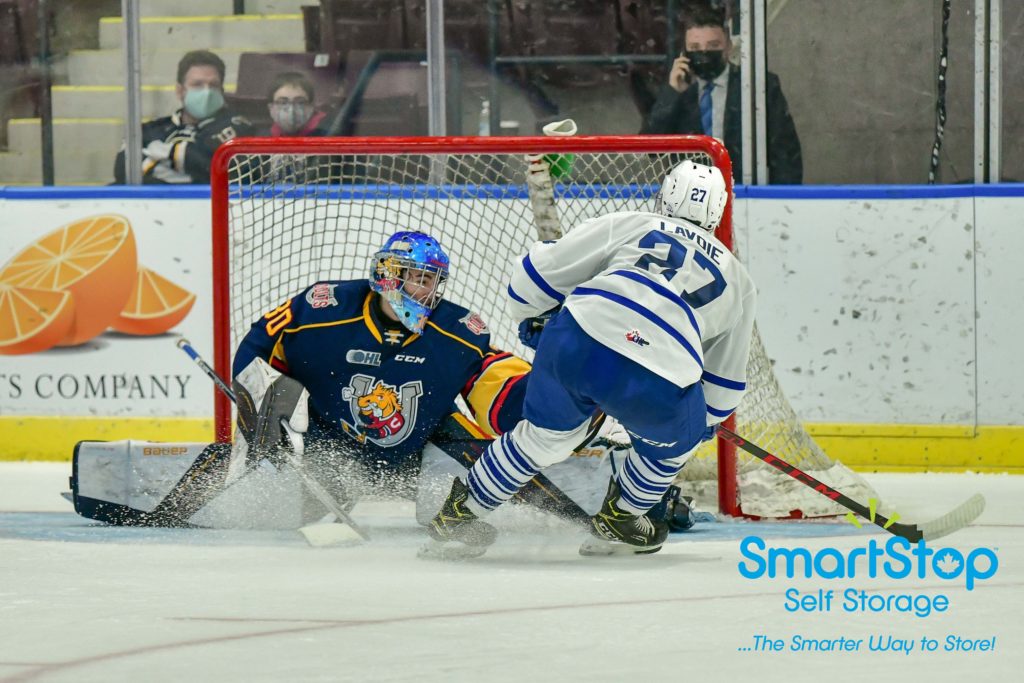 Roman Basran stopped all 26 shots for his second OHL shutout as the Steelheads extended their point streak to nine games with a 3-0 win over the Barrie Colts.

Coming off a dominating 7-1 victory on the road, the Steelheads returned to home ice for a divisional matchup against the Barrie Colts.

The first period was a great defensive battle between the two rivals, but the Steelheads struck paydirt at the 9:32 mark after Zakary Lavoie jammed the puck past Barrie netminder Mateo Lalama for a 1-0 lead. Owen Beck and Max Dodig were credited with the assist.

A solid last-minute Steelheads’ defensive stand thwarted the Colts efforts as the period came to a close.

Strong goaltending and plenty of opportunities headlined the second period. Steelheads netminder Roman Basran was terrific in the middle frame, stopping all 10 Colts’ shots. Basran’s most notable saves came at the 2:55 mark as the BC native robbed Colts’ Evan Wierling, and a tremendous sprawling pad save at the 6:32 mark, depriving Colts’ Nathan Allensen of a goal.

Another Steelheads highlight in the period came with just over five minutes remaining when Luca DelBelBelluz displayed a dazzling display of athleticism, only to be stopped short by the Colts’ Lalama.

Steelheads capitalized on their opportunities in the final frame.

First, rookie Luke Misa scored his second goal of the year after sneaking the loose puck past the sprawling Lalama. Ethan Del Mastro received credit for the assist. Then, at the 9:45 mark, the Steelheads added insurance with Max Dodig’s first goal of the season. Zander Veccia and Chas Sharpe received the assists.

As the period went on, Basran and the Steelheads preserved the shutout and the victory with the defence’s stingy play and timely saves by the Steelheads netminder.

With the win, the Steelheads move to a third place tie with the Hamilton Bulldogs in the Eastern Conference. Next game for the Steelheads is a Sunday matinee tilt with the Sudbury Wolves at the Paramount Fine Foods Centre. Game time is 2:00 pm.