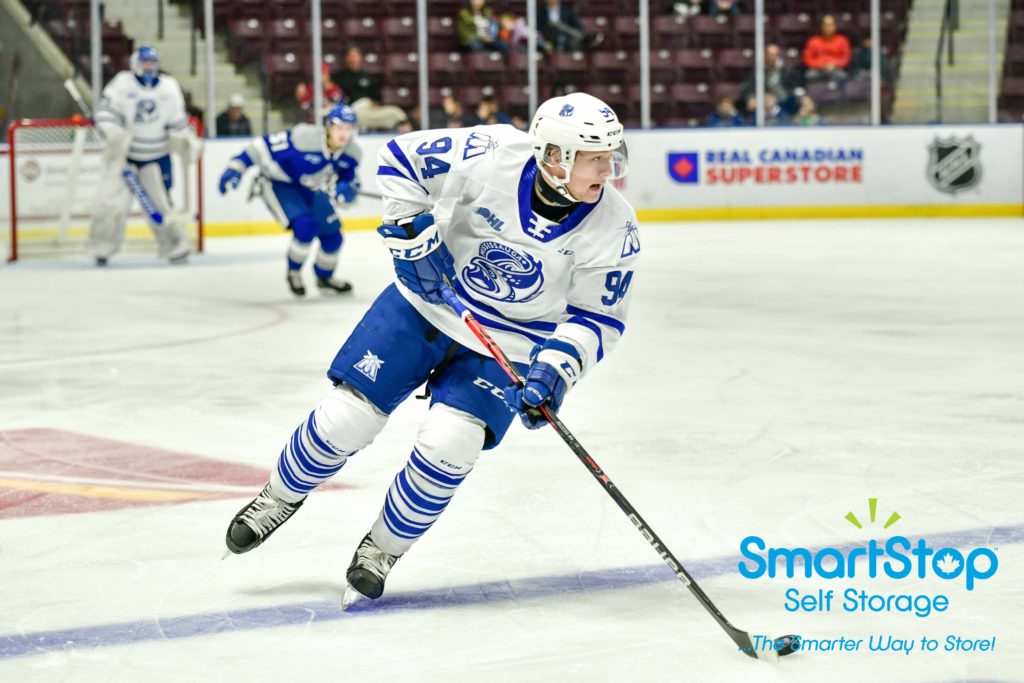 The Steelheads were looking to extend their point streak to ten games as they squared off with the Sudbury Wolves. It was a solid first period for the surging Steelheads. The Steelheads’ great offensive tempo paid dividends in the first ten minutes as Luca DelBelBelluz scored his eighth goal of the season at the 9:21 mark.

Playing in his 200th career OHL game, Aidan Preuter extended the Steelheads lead, courtesy of the one-timer past Wolves netminder Jonathan Lemaire. With the assist, Owen Beck extended his point streak to seven games (3G, 5A). Kasper Larsen was also credited with the assist.

With over four minutes remaining in the frame, Sudbury got one back, as Nick DeGrazia shot past Steelheads netminder Roman Basran to cut the deficit to 2-1. Basran was sharp in the opening 20 minutes despite conceding the goal, stopping 10 out of 11 shots.

The second period proved the Steelheads’ resilience this season. After the Wolves scored to tie the game at the 11:05 mark, the Steelheads woke up with two goals in 11 seconds. Just 33 seconds after the Sudbury goal, DelBelBelluz notched his second of the game, his 15th point in the last 10 games (6G, 9A). James Hardie and Ole Bjorgvik-Holm received the assists.

Then, at the 11:49 mark, Zander Veccia snuck the puck through Lemaire to give the Steelheads a 4-2 lead. Luke Misa received the assist, marking the third straight game with at least a point (1G, 2A). Basran and the Steelheads penalty kill withstood the Wolves offensive pressure at the closing seconds of the frame.

The goals kept on coming for the Steelheads. The outpour began at the 4:56 mark as James Hardie scored his 12th of the season. Misa and Veccia both registered their second assists of the game on Hardie’s goal. The Steelheads’ second line continued their productive outing when Owen Beck extended the Steelheads’ lead with a glorious breakaway goal at the 11:44 mark. Lavoie and Preuter received the assists.

DelBelBelluz nailed his first career hat trick on the power-play at the 14:02 mark, scoring the Steelheads’ first goal with the man advantage since November 7 against the Hamilton Bulldogs.

The victory gives Steelheads ten straight games with at least a point. Next up for the blue and white is back-to-back contests on the road against the Wolves, starting on Thursday (November 25)