SmartStop Game Recap – Steelheads Get in the Win Column 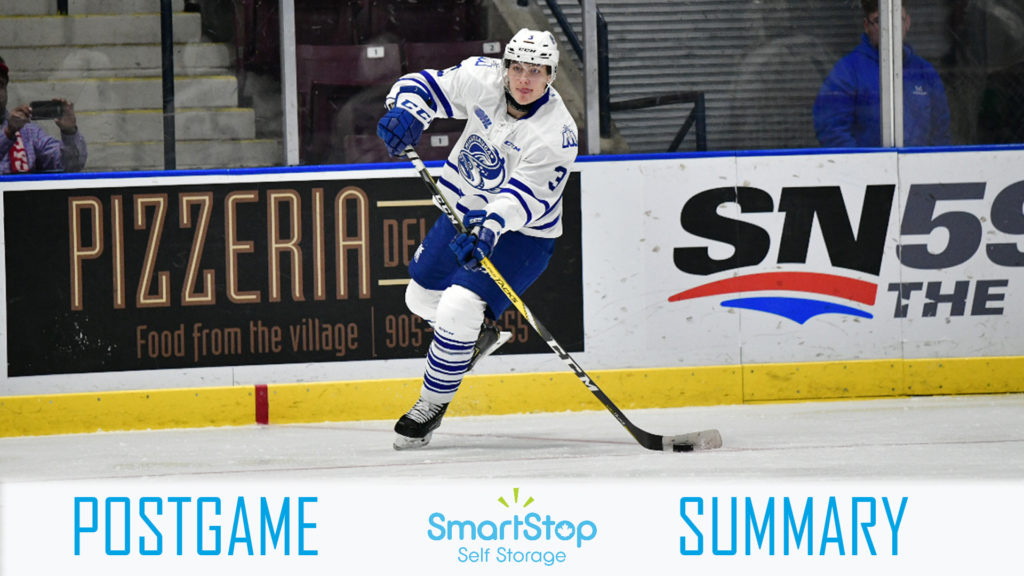 Mississauga, ON – The Mississauga Steelheads kicked off October by taking on the Hamilton Bulldogs at the Paramount Fine Foods Centre on Friday night.

While both teams had plenty of scoring opportunities, the goaltenders proved to be the stars of the first period as the teams headed to the dressing rooms tied at zero. Nicholas Canade caused a turnover at centre ice and found Aidan Prueter who drove hard to the net but could not beat the crossbar for the Steelheads best scoring chance of the frame. At the end of the period, the shots on goal were 13 to 11 in favour of the Bulldogs.

The Steelheads came out firing to start the second period, as James Hardie found the back of the net off a rebound from Cole Schwindt to open the scoring. Not too long after, it was Hardie who intercepted a breakout pass and fired a hard shot that found Richard Whittaker who made no mistake in tucking it home. The Steelheads offense did not stop there, as Whittaker caused a turnover behind the net and made a nice pass to a wide open Keean Washkurak to make the score 3-0. Thomas Harley fired a quick wrist shot past goaltender Zachary Roy as Mississauga continued to play their best hockey of the season, outshooting the Bulldogs 24-9 in the period.

Liam Ham wasted no time in the third period, blasting a slapshot off the inside of the crossbar. Arthur Kaliyev and Jan Jenik got the Bulldogs on the scoreboard, as a Kaliyev one-timer and Jenik breakaway goal made the score 5-2. Max Dodig (#43) scored the first goal of his OHL career on the 43rd shot of the game with some smooth hands to deke out Roy and seal the victory for the Steelheads by a final score of 6-2. The victory marked Head Coach James Richmond’s 100th career OHL win.

Richard Whittaker (1 goal, 2 assists) and James Hardie (1 goal, 1 assist, 7 SOG) led the way for the Fish as they secured their first win of the season. Goaltender Kai Edmonds played one of his best games, stopping 26 of 28 shots (.929 SV%).

Following the game, forward Richard Whittaker had the following to say about the team’s win “It was big when Harley came back in the lineup, as he’s been on fire the past couple of games, and he’s got the boys edging to sneak up on the league”.

The Steelheads return to the Paramount Fine Foods Centre on Sunday to take on the Windsor Spitfires. Olympic Gold Medallist Natalie Spooner will be in attendance to drop the puck and sign autographs as we celebrate World Girl’s Hockey Weekend. Skate on the same ice as your favourite Steelheads players as we have a post-game skate and autograph session. Tickets can be purchased by visiting the Box Office or by calling 905-502-9100.