SmartStop Game Recap – The Steelheads Push the Streak to 10 Games 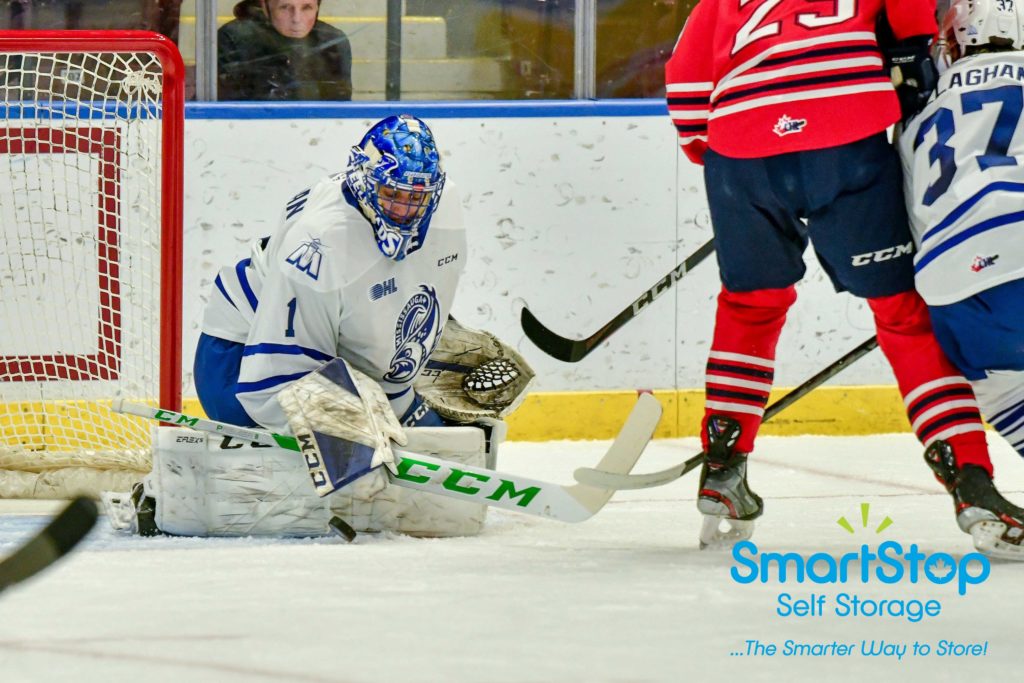 The Mississauga Steelheads pick up a point in a shootout, becoming the first OHL team to reach 50 points and push their point streak to 10-straight games.

After a dominating game against Oshawa last Sunday evening, the Steelheads returned to the Tribute Communities Centre and looked to extend their point streak to 10 games. With only 30 seconds on the clock, the Steelheads struck early as Luca DelBelBelluz fired a shot past Generals’ Patrick Leaver giving number 73 his 19th goal of the season. At the 7:22 mark with heavy traffic in front of the Trout’s zone, Generals’ Lleyton Moore sunk past Steelheads’ Roman Basran, tying the game 1-1.

Mississauga continued to put on the pressure and get multiple shots in the Generals zone, but were shut down by Leaver. Oshawa struck again as Nikita Parfenyuk shot a one-timer past Basran at the 19:26 mark, giving the Generals’ a 2-1 lead. After the first frame, both the Steelheads and Generals had an even match-up of shots on goal.

Mississauga established a high-intensity tempo early into the second frame. The pressure paid off as the Blue and White tied the game 2-2 at the 1:35 mark, giving OHL’s rookie leader Owen Beck his 14th goal and 30th point of the season. Aidan Prueter received the assist as he extended his point streak to four games.

Later in the frame, Oshawa took the lead as Generals’ Calum Ritchie picked up a rebound and potted it past Steelheads’ netminder Basran at the 11:12 mark. At the end of the second period, tension rose as heated remarks were exchanged, giving way to four-on-four hockey to start the third period.

Battling to get on the board, Mississauga continued to pressure the Generals’ blue zone, getting multiple opportunities on Oshawa’s net. On the other end of the ice, Basran repeatedly halted the Generals’ from getting ahead, leaving room for the Steelheads to even the match.

Late into the third, the Steelheads’ Max Dodig tied the game at three a piece after receiving an outstanding assist from Beck. Ole Bjorgvik-Holm also was credited with the assist. Basran continued to make crucial saves, sending the Steelheads into overtime.

In the extra frame, the Blue and White got multiple shots on the Generals’ netminder Leaver. Basran also made an outstanding save against Oshawa’s captain Ty Tullio, kicking the puck off with his left toe. After five minutes of play, both teams were unsuccessful in getting a puck in the back of the net, resulting in a shootout.

The Mississauga Steelheads lose a tough match-up in the shootout, but are able to continue their point streak and become the first OHL team to reach 50 points this season. Mississauga looks to bounce back tomorrow night against the Peterborough Petes on home ice.