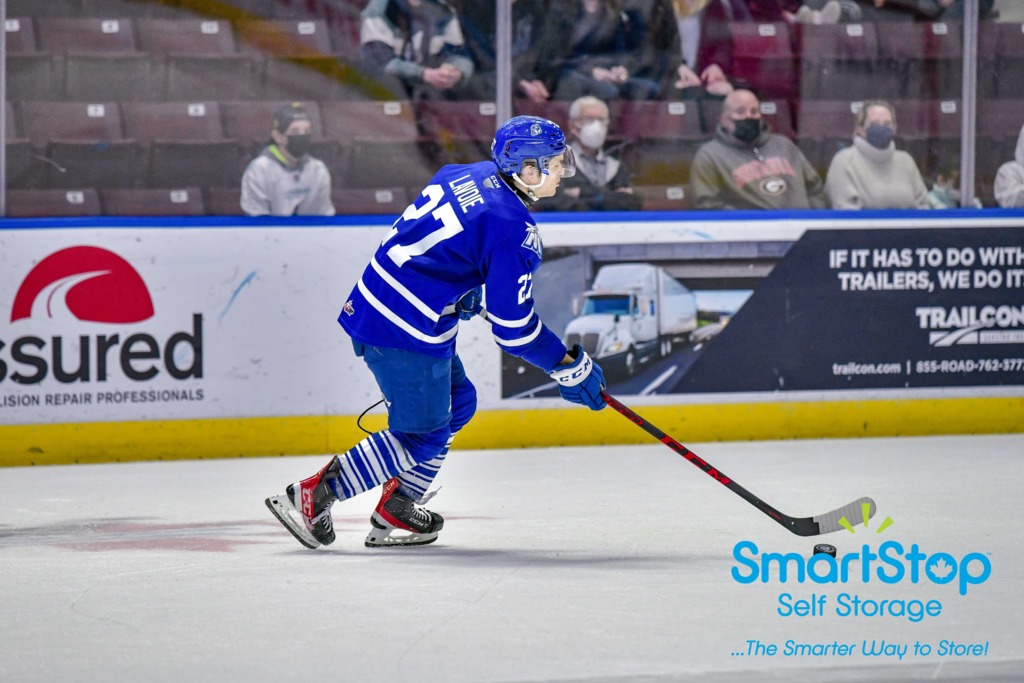 A hat trick for Zakary Lavoie plus a goal from James Hardie gives the Steelheads a win in their season opener versus the Niagara IceDogs.

Following ceremonial proceedings to open the season, the puck was dropped and the Steelheads came out powerful.

Holding the zone for a majority of the opening three minutes, it was not long before the Steelheads were on the board. Jake Uberti took advantage of the IceDog’s turnover and rushed up the ice, passing the puck to Zakary Lavoie at the last second who beat Niagara netminder Owen Flores, to put the Steelheads up 1-0 early in the first period. Lavoie’s goal marks the first goal of the entire OHL season, with Uberti and Dylan Gordon recording the first assists of the year.

On the other end, Alessio Beglieri was solid between the pipes to keep the IceDogs from tying it up. Making a big toe-save after a series of shots in the final minutes, Beglieri and the Steelheads managed to keep the score at 1-0 to end the period.

Using the momentum they built in the first period, the Steelheads came out flying and with Beglieri making a series of great saves to start on the other end of the ice. Uberti only waited four minutes before making another amazing play, gaining the space needed to pass the puck to Lavoie, who found the back of the net once again, giving both forwards their second points of the night.

Niagara, looking to get back in the game, upped the pressure significantly, but it was nothing the Steelheads’ defence and goaltender could not handle. The defencemen were able to keep the shots to a minimum, and Beglieri shut the door on the shots that he faced, keeping the IceDogs at bay to finish the period 2-0.

The Trout came into the third period looking to keep the lead and close out the game. However, less than two minutes into the frame, Niagara’s Aidan Castle managed to slide one past Beglieri, cutting the Steelheads lead in half. Looking to continue their newly gained momentum and capitalize on their power play, the IceDogs held the zone and Brenden Sirizzotti put one in the back of the net, tying the game at two.

The Steelheads did not take kindly to the IceDogs evening the score, and only took around three minutes to take back the lead. Uberti made a great play to enter the zone, rushing in and passing the puck to Hardie in front at the last moment. Hardie recorded his first goal of the season with Uberti picking up his third assist of the night and Finn Harding securing his first point of his OHL career. The goal was reviewed to determine if Lavoie was offside when Uberti entered the zone, however, it was deemed a good goal.

The game continued to go back-and-forth, with the Steelheads looking to add a reassurance goal and the IceDogs looking to tie up the game once again. Niagara pressured the Trout, taking non-stop shots on Beglieri, who made several key saves. With twelve minutes left in the period, the IceDogs managed to shoot another one pass Beglieri, tying up the game once again, ultimately sending the game to overtime tied at three a piece.

The Steelheads came out determined to win their first game of the season, pressuring the IceDogs and looking for a chance to capitalize. The Trout did not have to wait very long, as two minutes into the extra frame, Lavoie put the puck in the back of the net to complete the hat trick and secure the first win of the OHL season. Luke Misa and Chas Sharpe picked up assists on Lavoie’s third goal of the game, earning them each their first point of the season.

The Steelheads head home to face the Sudbury Wolves in their home opener this Sunday October 2. Don’t miss out on home opener festivities, including a pre-game tailgate at the Paramount Fine Foods Centre. Get your tickets here!