SmartStop Recap – Back in the Win Column 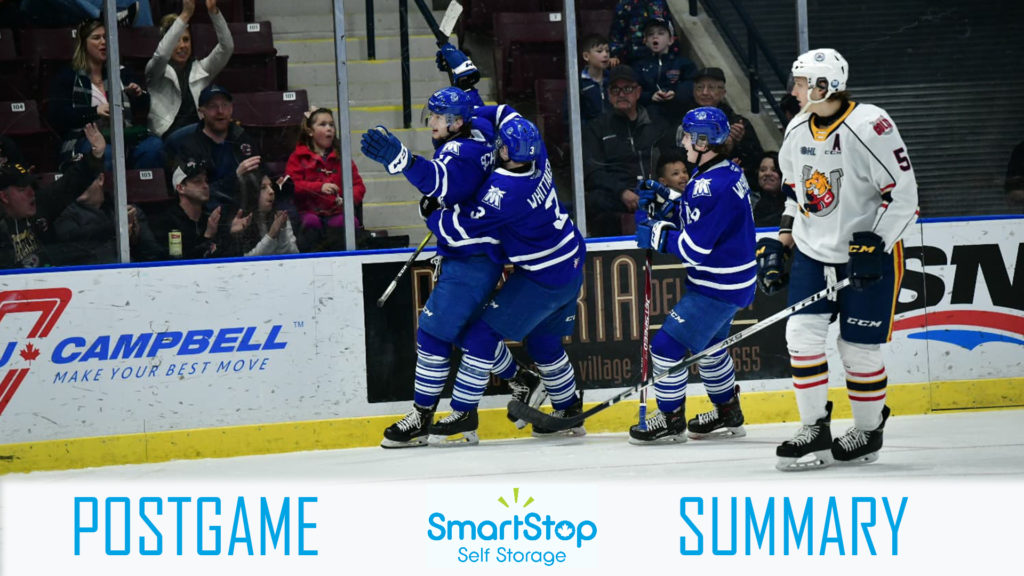 Mississauga, ON – The Mississauga Steelheads took on the Barrie Colts in a Central Division matchup at the Paramount Fine Foods Centre on Sunday afternoon. The Steelheads would need a win today in order to keep pace with Barrie in the standings.

The Steelheads start to the game couldn’t have gone any better, with Aidan Prueter opening the scoring early, deflecting a pass in front of the net from Nick Isaacson to make it 1-0. Near the end of a back-and-forth period with both teams seeing their chances, Keean Washkurak found James Hardie on a 2-on-1, who made no mistake beating Jet Greaves to increase the Steelheads lead to two. At the end of the first, the Steelheads led 2-0 while shots on goal were tied at 11.

Barrie cut the Steelheads lead to one early in the second, as Anthony Tabak toe-dragged around Mississauga’s defence on a 2-on-1 and wired a wristshot past Kai Edmonds. With Barrie in the penalty box for tripping, Cole Schwindt scored one of the finest goals you’ll see, dangling around Barrie’s defence and going bardown on Greaves to regain the Steelheads two-goal lead.

No less than a minute later, Calvin Martin said “anything Schwindt can do, I can do better”, splitting Barrie’s defence and going bardown to make the score 4-1.

With four minutes to go in the period, Schwindt found Washkurak bursting into the zone with a spinorama pass, with Washkurak finishing the play by sniping blocker side on Greaves to increase the Steelheads lead to four. The Steelheads added one more before the end of the period, as Aidan Prueter took a shot that was deflected high above the net, bounced back and hit William Portokalis in the chest, re-directing into the net to make the score 6-1 Steelheads heading into the third.

The offence continued their tear to start the third, as Richard Whittaker placed a shot perfectly inside the post beating Arturs Silovs, now in the game for the Colts. Calvin Martin scored his second of the game, a tap in on a pass from Richard Whittaker to seal the victory for the Steelheads, as they walked to an 8-1 victory.

It was a huge win for the Fish, who needed a win to keep their hopes for first place in the Central Division alive. The Steelheads now sit just four points behind Sudbury and Barrie for the first place spot. Keean Washkurak and Cole Schwindt both registered three points (1G, 2A), while Calvin Martin added two goals, and Thomas Harley and Nick Isaacson added two assists in the victory.

Following the game, Steelheads forward Keean Washkurak had the following to say about a big Central Division victory “I think that was one of our full 60-minute games that we’ve played. We were really consistent throughout each period, driving to the net and pucks were going in.”

The Steelheads will return home on Friday next weekend to take on the Owen Sound Attack. For ticket information, contact please visit the Box Office, purchase online through ticketmaster.ca or by calling 905-502-9100.