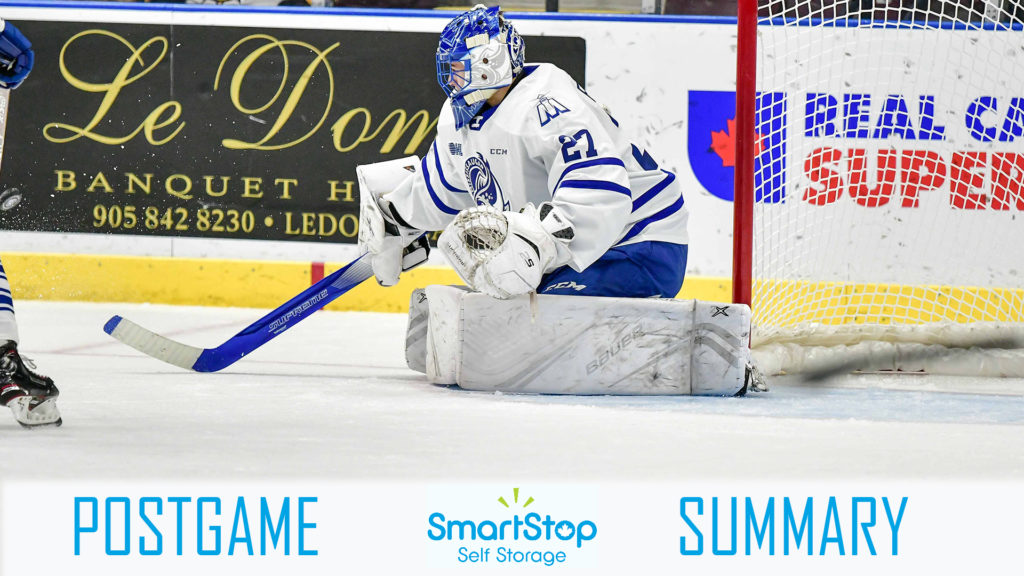 Sudbury, ON – The Mississauga Steelheads travelled to Sudbury on Sunday afternoon looking to finish off their three-game weekend on a high note. The Steelheads were without forwards Cole Schwindt, Keean Washkurak and Aidan Prueter as they were out of the lineup with injuries.

Mississauga announced yesterday that they had signed right winger Rylan Bowers, who was originally selected by the hockey club in the 12th round (238th overall) of the 2018 OHL Priority Selection. The Komoka, Ontario native started the season with the Listowel Cyclones (GOJHL), where he registered 30 points (14G, 16A) in 33 games. Sunday’s game against the Sudbury Wolves represented the first OHL game of Bowers career.

The Steelheads went to the powerplay early in the first, as Macauley Carson was called for goaltender interference. Kai Edmonds made a few big saves on Sudbury odd-man rush opportunities to keep the score tied at zero. While on their second powerplay opportunity of the game, Rylan Bowers opened the scoring, receiving a pass from Max Dodig behind the net for the first goal of his OHL Career. Edmonds made an incredible sprawling save with under a minute to go, as he played one of the best periods of his season stopping 11/11 difficult shots on goal. The Fish headed into the first intermission with a 1-0 lead, on the back of Edmonds and Bowers first OHL goal.

The second period came and went with neither team registering a penalty nor scoring a goal. The Steelheads outshot the Wolves 11-8 in the frame. Edmonds continued to play stellar as he made multiple outstanding saves on Wolves scoring chances. James Hardie was driving the offense for Mississauga in the period, as he registered 4 shots on goal. The Steelheads headed into the third period with a 1-0 lead, looking to close out the weekend with another victory.

Mississauga headed to the powerplay a few minutes into the third with a chance to increase their lead, as Byfield headed to the penalty box for hooking and Owen Gilhula for roughing. Ty Collins made a great play to force a Wolves turnover, leading to Calvin Martin finding James Hardie with a pass on a 2-on-1, making no mistake filling the back of the net. Sudbury pulled their goaltender with three minutes remaining for the extra attacker, down by two. The Steelheads capitalized, with Richard Whittaker finding the empty net from the defensive zone to make it 3-0. Matej Pekar broke Edmonds shutout with eleven seconds to go in the game, and after a length review due to a possible high stick, it was ruled a good goal. Mississauga would hold on to win by a final score of 3-1.

It was a character win for the Steelheads, who were missing Cole Schwindt, Keean Washkurak and Aidan Prueter from the lineup. With the victory, Mississauga jumps into second place in the Central Division, just six points behind Sudbury for first. Kai Edmonds was stellar in the contest, stopping 30/31 shots on goal, being beaten only by a tough deflection in the dying seconds of the game. In addition, rookie forward Rylan Bowers scored the first goal of his OHL career in his first OHL game.

Mississauga will play two games next weekend against the Oshawa Generals and Barrie Colts, before returning to the Paramount Fine Foods Centre on Friday, January 24th to take on the Peterborough Petes. All Friday Home Games during the 2019-20 season feature $3 off domestic tall cans. Tickets to the game can be purchased by visiting the Box Office, online through ticketmaster.ca or by calling 905-502-9100.