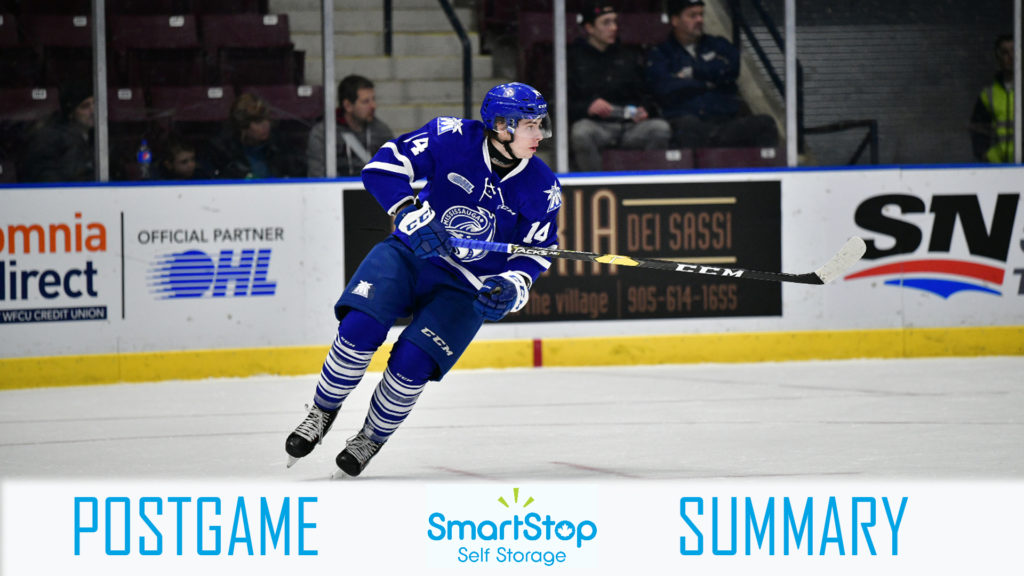 Mississauga, ON – The Mississauga Steelheads travelled to the Nation’s Capital to take on the Ottawa 67’s on Saturday afternoon.

The Steelheads were coming off their 8th annual Pink at the Rink game against the London Knights, where the team wore special uniforms. All jerseys will be autographed and are currently available for auction, with all proceeds going to the Canadian Cancer Society.

The Steelheads got off to a quick start to the game, as Calvin Martin burst in on a breakaway but was stopped by Will Cranley. Ottawa opened the scoring, as Joseph Garreffa found Marco Rossi on a cross-crease pass that found its way past Kai Edmonds. While on the penalty kill, Richard Whittaker stole the puck from the 67’s defence and skated in on a breakaway, but his backhand attempt was stopped by Cranley. At the end of the first, Mississauga was outshooting Ottawa 14-9.

The second period was a defensive battle, as neither team was able to score. Edmonds made multiple key saves in the period to keep the Steelheads in the contest. Ottawa had an opportunity to increase their lead as they headed to the powerplay, but were unable to score. With a minute left in the frame, the Steelheads headed to a 5-on-3 powerplay that would carry over into the third. At the end of the second, Kai Edmonds had stopped 20/21 shots on goal (.952 SV%).

The Steelheads pushed hard in the third period to find the tying goal. With five minutes remaining, Edmonds made a big save on a 3-on-1 opportunity for the 67’s. With the Steelheads netminder on the bench for the extra attacker, Jack Quinn scored an empty netter for Ottawa to seal the victory for the home team. Mississauga outshot Ottawa 31-29, but ultimately fell by a score of 2-0. Kai Edmonds played one of his best games of the season, stopping 27/28 shots on goal in the contest (.964 SV%).

The Mississauga Steelheads will head to Kingston on Sunday to finish off their 3-game week, before returning to the Paramount Fine Foods Centre on Wednesday, at 11:00 AM, for their annual School Day Game against the Guelph Storm. Tickets to the game are $7 and can be purchased by visiting the Box Office, online through ticketmaster.ca or by calling 905-502-9100.