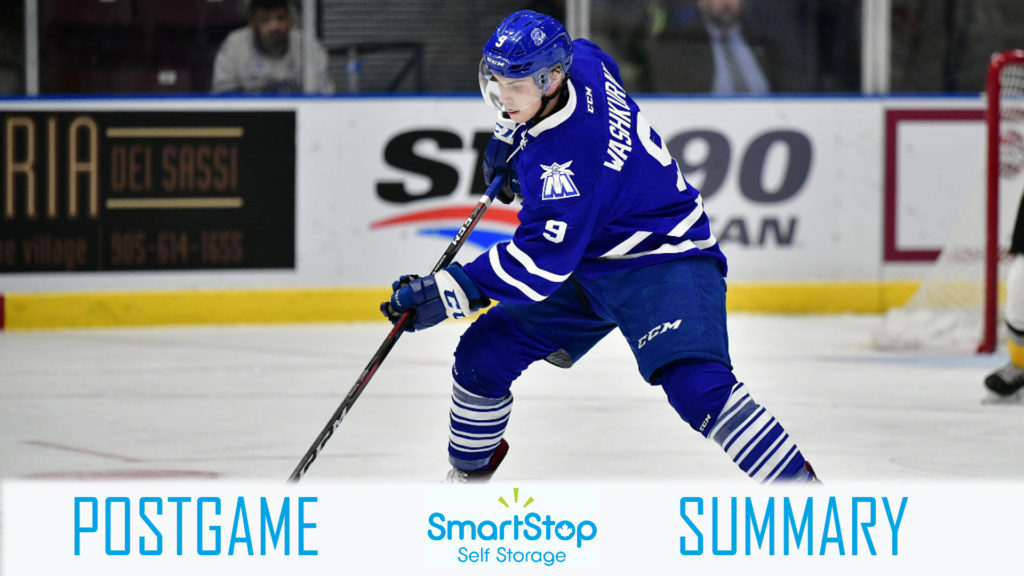 Saginaw, MI – The Mississauga Steelheads wrapped up their two-game weekend taking on the Saginaw Spirit on Saturday evening.

Both teams got off to a quick start, ringing shots off the post to open the game. The Steelheads headed to the powerplay twice in the period, but couldn’t capitalize on the man advantage. With 30 seconds left in the frame, Kai Edmonds made a nice save on Jake Goldowski who stepped into the slot to keep the score tied at zero. At the end of the first, Saginaw was outshooting Mississauga 8-2.

The second period got off to a physical start, with both teams seeing the box for after the whistle penalties. Saginaw eventually broke the tie, as a tic-tac-toe passing play was finished by T-Bone Codd crashing the net hard. The Spirit made the score 2-0, as Danny Katic intercepted a pass behind the net and found Cole Coskey in front who beat Edmonds up high. At the end of the second, Edmonds had stopped 22/24 shots on goal (.917 SV%), but the Steelheads headed to the intermission looking for a comeback.

The Steelheads pushed hard in the third, with Ham finding Collins on a 3-on-1, but couldn’t beat the outstretched glove of Frappier. With Saginaw taking penalties for high-sticking and tripping, the Steelheads had an opportunity to chip away at the lead, but couldn’t manage to find the back of the net. Saginaw would hold on to defeat Mississauga by a score of 2-0. The Fish had a strong push in the third period recording 17 shots on goal.

The Steelheads will return home next weekend to take on the Sarnia Sting on Friday, November 15th and the Erie Otters on Sunday, November 17th. Tickets to the games can be purchased by visiting the Box Office, online through ticketmaster.ca or by calling 905-502-9100.