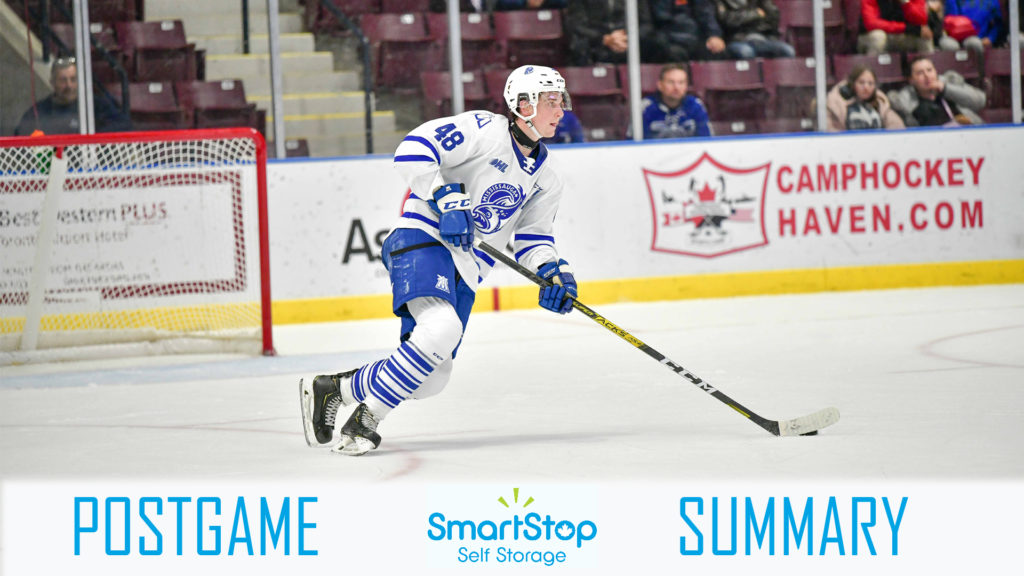 Peterborough, ON – The Mississauga Steelheads traveled to Peterborough on Saturday for their third game in three nights. Kai Edmonds got the start in goal for the Fish, after Joe Ranger got the win last night.

After a back and forth start to the contest where chances were plenty, the Petes opened the scoring on the powerplay as Akil Thomas found a cross-crease seam to OHL leading goal scorer Nick Robertson for the one-time marker. Peterborough would add one more on the powerplay in the last minute of the period, on a similar play, with Nick Robertson finding Akil Thomas for another cross-crease one-timer. At the end of the first, the Steelheads were outshot 11-5, with Kai Edmonds making several big saves to keep the Fish in the game.

Peterborough increased their lead to three early in the second, as Toronto Maple Leafs prospect Semyon Der-Arguchintsev shot home a rebound on a scramble in front. The Petes would add one more before the end of the period to make it 4-0, on a goal from Declan Chisholm. Mississauga would have their work cut-out for them to climb back into the game in the third.

Cole Schwindt got the Steelheads on the board early in the third, bursting past Peterborough’s defence with speed and going forehand-backhand into the net to beat goaltender Hunter Jones. The Fish suddenly had all the momentum, immediately heading to the powerplay on a high-stick after getting on the scoreboard. With the Steelheads seemingly in control and pushing for a comeback, Nick Robertson scored his second of the night to put the game out of reach. Mississauga outshot Peterborough 17-5 in the third but fell by a final score of 5-1.

Florida Panthers prospect Cole Schwindt scored the lone goal for the Steelheads in the loss.

The Steelheads will play one more road game in North Bay next Thursday, before returning home to the Paramount Fine Foods Centre on Friday, March 13th for the second annual New School Night game. To purchase tickets, please visit the Box Office, purchase online through ticketmaster.ca or by calling 905-502-9100.