SmartStop Recap – A Battle in Kingston 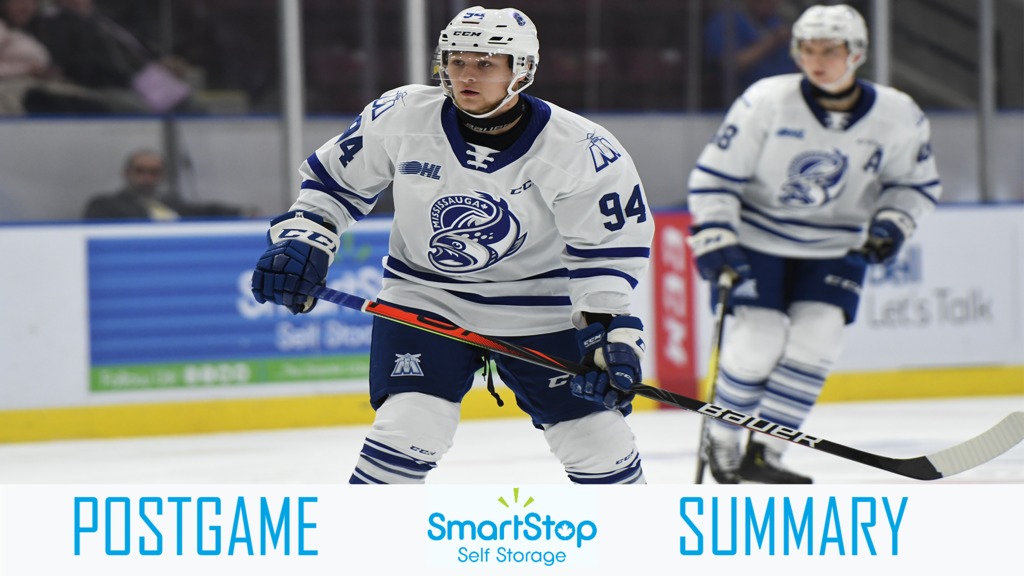 Kingston, ON – The Mississauga Steelheads wrapped up their weekend with a road game against the Kingston Frontenacs on Sunday afternoon. Kai Edmonds got the start in goal for the Fish, while Richard Whittaker remained out of the lineup with an injury.

With a Sudbury Wolves win over the Barrie Colts on Saturday evening, the Wolves pulled three points ahead of the Steelheads for first place in the Central Division, so the Steelheads would need a win on Sunday afternoon to keep pace in the standings.

James Hardie opened the scoring with his 30th goal of the season for the Steelheads, as Nic Canade made a nice pass to find him open in front of the net. Cole Schwindt received a secondary assist on the play, which extended his point streak to ten games. That would be the only goal scored in the first period, as the Steelheads headed to the first intermission with a 1-0 lead. Mississauga’s penalty kill was perfect in the first killing off two penalties.

Early in the second period, it was the Steelheads fourth line who was making things happen, putting the pressure on Kingston in the offensive zone. Luca DelBelBelluz forced a Kingston turnover at the blue line, and Thomas Harley found Michael Stubbs with a feed in front of the net who wired a shot top shelf on Christian Propp. No less than a minute later, Calvin Martins speed was too much for the Kingston defence to handle as he burst in the offensive zone and put a low shot on goal. Aidan Prueter picked up the rebound and tucked it home to make it 3-0 Steelheads midway through the second.

With the Steelheads on the powerplay, Prueter scored his second goal of the game picking up the rebound on a shot from Ty Collins to make it a four-goal lead. Kingston answered back, as a turnover at the blueline led to a 3-on-1 the other way with Shane Wright finishing it off, to make the score 4-1. The Frontenacs continued to apply the pressure, as a quick release off the stick of Dawson Baker beat Edmonds to cut the Steelheads lead to two. The Steelheads took their lead into the third period, looking to close out the weekend with a win.

Kingston had a key opportunity to cut the lead to one early in the third, as the Steelheads went to the penalty box for interference. However, Mississauga’s PK remained perfect as time on the man advantage expired. Martin Chromiak ended the streak on a 4-on-3 advantage, firing a shot high on Edmonds, as all of a sudden the Frontenacs were within a goal. With under two minutes to go, a bouncing puck found the stick of Jordan Frasca, tying the game at four as this game seemed destined to head to overtime. James Hardie had other plans however, as less than thirty seconds later he picked up the rebound on a shot from Thomas Harley and flipped it over a sprawling Ryan Dugas to regain the Steelheads lead. Mississauga held on to take this one by a final score of 5-4.

Following the game, James Hardie spoke about a good team effort “I thought we battled back well. They outplayed us a little bit in the third, but we weren’t going to let them walk over us, so we came back and got the win. We’re really tight together right now, we know what’s up for grabs and we want first place.”

With the Steelheads win, they move back within a single point of the Sudbury Wolves for first place in the Central Division. All eyes will be on the Sudbury and Niagara game at 7:05 PM tonight as the Fish look to keep their pace for the division lead.

For tickets to the Steelheads Valentines Day Game or Family Day Game, please visit the Box Office, purchase online through ticketmaster.ca or by calling 905-502-9100.