SmartStop Recap – Heating Up the North 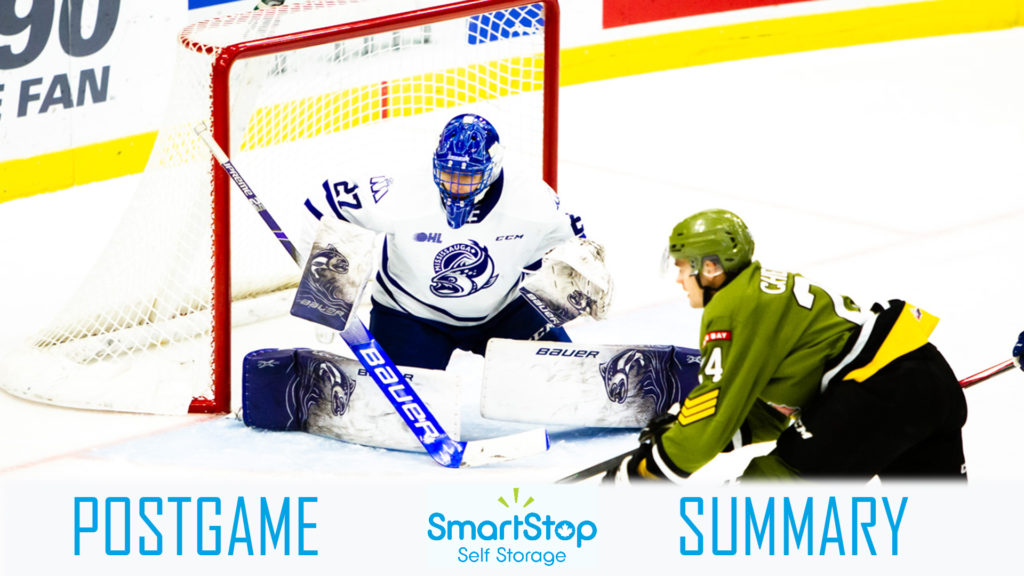 North Bay, ON – The Mississauga Steelheads kicked off their six-game road trip on Thursday night by taking on the North Bay Battalion. Thursday’s game represented James Hardie’s 100th career game, suiting up in the OHL.

North Bay went to the powerplay early, as the Steelheads headed to the box for a hooking penalty. Mississauga headed into the game having killed fifteen penalties in a row, not allowing a powerplay goal since December 29th against Kingston. The Steelheads penalty kill unit continued to stay hot as North Bay was unable to score. With five minutes to go in the first, Nic Canade took advantage of a North Bay giveaway in front of the net and wired a shot past Joe Vrbetic to put the Steelheads up by one. On an odd-man rush, Aidan Prueter made a nice cross-ice feed to Calvin Martin who beat Vrbetic top shelf to make the score 2-0. The Steelheads took their two-goal lead into the first intermission, while outshooting North Bay 11-7.

The Steelheads jumped out to a three-goal lead early in the second, as James Hardie batted a rebound out of the air off a shot from Nic Canade. Ty Collins increased the lead to four as he faked a pass to Aidan Prueter on an odd-man rush and picked the corner on Vrbetic. The Steelheads made a beautiful tic-tac-toe passing play as Liam Ham found James Hardie down low, who found a seam through five North Bay players to Richard Whittaker, making the scoring 5-0 as the Steelheads continued the rout. At the end of the second, Kai Edmonds had stopped 22/22 shots on goal as Mississauga was in complete control of the game.

Midway through the third period, Hardie and Canade found themselves on a 2-on-0, making a nice back-and-forth passing play to beat Vrbetic. It was all Steelheads in the third, as they piled on another 20 shots on goal to increase their total in the game to 40. Mississauga would cruise their way to a victory, by a final score of 6-0.

Kai Edmonds stopped 29/29 shots on goal for his second shutout of the season, while James Hardie (2G, 1A) and Nic Canade (1G, 2A) both recorded three-point games in the win. Richard Whittaker (1G, 1A) and Ty Collins (1G, 1A) were also amongst the Steelheads who registered multi-point games. It was a complete team effort for the Fish who started their road trip on a high note.

Following the game, Kai Edmonds spoke about his thoughts on the Steelheads play “My defence and the whole team played pretty good. I thought we were sound defensively, we didn’t really give them anything and that made my job a lot easier. I haven’t had the most success in this rink in the past, so tonight it was really nice to get a big win.”

Mississauga will hit the road again tomorrow as they will face the Soo Greyhounds in their second game of the weekend. The Steelheads will return to the Paramount Fine Foods Centre on Friday, January 24th to take on the Peterborough Petes. All Friday Home Games during the 2019-20 season feature $3 off domestic tall cans. Tickets to the game can be purchased by visiting the Box Office, online through ticketmaster.ca or by calling 905-502-9100.