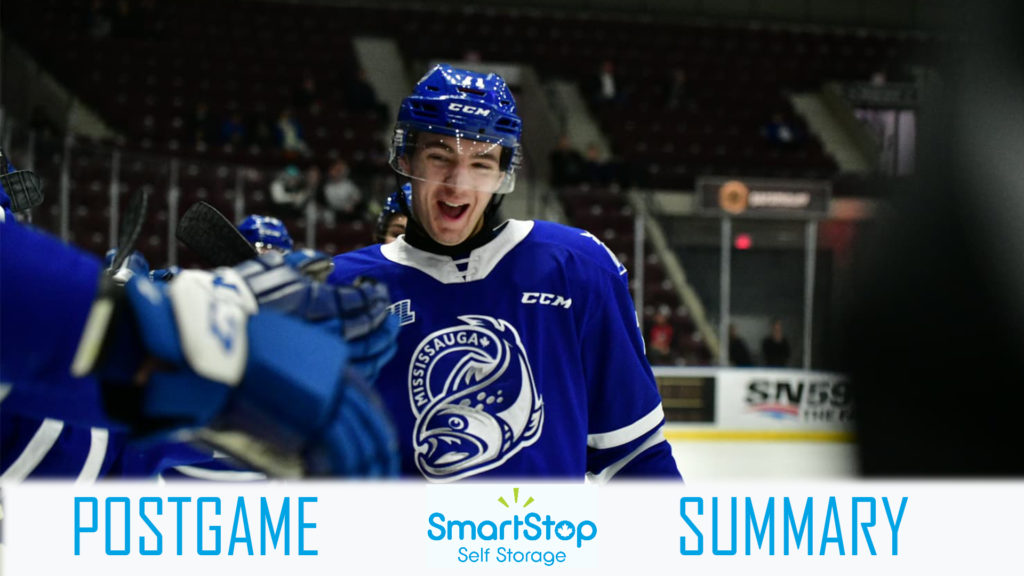 Mississauga, ON – The Mississauga Steelheads took on the North Bay Battalion at the Paramount Fine Foods Centre on Friday night. Joe Ranger got the start in net, making his first start since January 23rd at Niagara.

The Steelheads got off to a great start to the game, nearly opening the scoring as Cole Schwindt found James Hardie with a stretch pass for a breakaway, beating Joe Vrbetic, but ringing the iron. Luke Moncada had other plans, as he made a nice move to dangle around the Steelheads defence and subsequently Joe Ranger to score the games first goal. Mississauga nearly tied the game on a stretch pass off the end boards to Richard Whittaker, but Whittaker hit the post. Nic Canade, playing defence with Liam Ham out of the lineup, burst into the offensive zone with speed and wired a wrist shot top shelf on Vrbetic to tie the game at one with two minutes remaining in the period. The Steelheads were outshooting North Bay 15-8 at the end of the first, but the score was even.

Following the first period, Steelheads forward Nicholas Canade commented on scoring the games first goal “The puck bounced off the wall, so I decided to take it up and go on the rush. I made a nice move around the defender and shot top shelf.”

Ty Collins gave the Steelheads their first lead of the game early in the second, scoring on a nearly impossible angle from behind the goal line. The Battalion answered back quickly, as 2020 NHL Draft prospect Brandon Coe found himself all alone on Ranger beating him over the shoulder with a quick release. Mississauga regained the lead on perhaps the strangest goal they will score all season, as Ty Collins in the neutral zone, deflected a length of the ice pass from Duncan Penman, fooling Vrebtic and sneaking into the back of the net. The Fish continued to pour on the pressure, with a blast from Penman coming on 3-on-1 with Calvin Martin and Cole Schwindt to make it 4-2. North Bay would not go down without a fight, cutting back into the lead as Alex Christopolous banged home a rebound on a shot from Liam Arnsby. On the first powerplay opportunity of the game, Cole Schwindt thread the needle to find James Hardie on a cross crease pass, making the score 5-3 just before the end of the second period. Mississauga scored four goals on eleven shots in the frame, as their offence burst out in a big way.

The onslaught continued in the third, as Duncan Penman scored his second of the game on a blast top shelf from the point on a 5-on-3 powerplay. Thomas Harley recorded the 100th assists of his OHL Career on the play. North Bay would get one back, with Brandon Coe scoring his second of the game on a scramble in front through the fivehole of Ranger. The Trout would get right back to work, on a shorthanded breakaway goal from Keean Washkurak and a snipe from Max Dodig. North Bay would add one more before the end of the game, but the Steelheads would take this one by a final score of 8 to 5.

With the win, the Steelheads have clinched their spot in the OHL Playoffs. Duncan Penman led the way for the team with one of the biggest games of his career, registering 3 points (2G, 1A), while Luca DelBelBelluz also recorded the second multi-point game of his career with 2 assists. Thomas Harley (2A) and Ty Collins (2G) were also amongst Steelheads who recorded multi-point games in the victory.

Luca DelBelBelluz spoke about the teams focus having clinched a playoff spot “We just gotta keep working hard. We can’t give up, we have to keep buying into the system and hopefully we’ll do well.”

Mississauga will play their third game in as many nights as they travel to Peterborough for a 7:05 PM puckdrop on Saturday. The Steelheads will play one more road game in North Bay next Thursday, before returning home to the Paramount Fine Foods Centre on Friday, March 13th for the second annual New School Night game. To purchase tickets, please visit the Box Office, purchase online through ticketmaster.ca or by calling 905-502-9100.