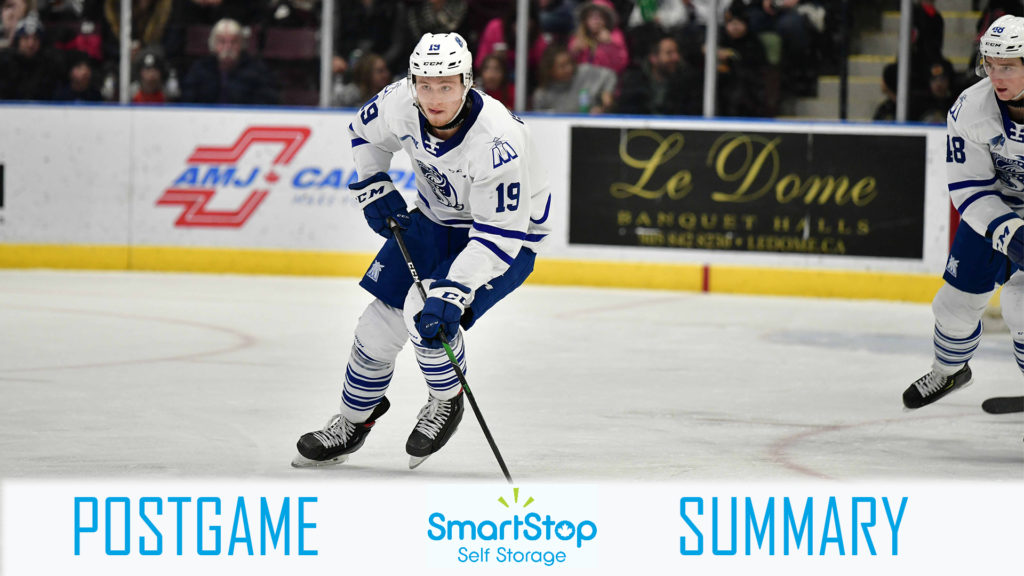 Barrie, ON – The Mississauga Steelheads opened their road trip by taking on the Barrie Colts in a key divisional matchup on Thursday night.

The Steelheads had the games first opportunity, as Barrie took a tripping penalty early in the first. James Hardie took full advantage, blasting a one-timer past Arturs Silovs to extend his point streak to nine games. Just a few minutes later, Mississauga capitalized on another powerplay, as Nick Isaacson tucked a shot that trickled just behind Kilovs to make it 2-0. It was all Steelheads in the first period, with the only blemish coming on a late hooking penalty. The Fish took a two-goal lead into the first intermission, while outshooting Barrie 14-5.

Barrie cut the Steelheads lead to one early in the second, as it was Trey Zagrzebski who scored his first OHL goal on a cross-crease pass from Victor Hadfield. Just under a minute later, Barrie tied the game as Evan Vierling deflected a Christopher Cameron slapshot from the point that found its way over the glovehand of Edmonds. After the Steelheads pressed back with a good shift in the offensive zone, rookie defenceman Brandt Clarke found some open ice off the rush and scored his third of the season to give Barrie a 3-2 lead. Just before the end of the second, Nic Canade scored a highlight reel goal driving the net off the rush, beating Silovs up high to tie the game at three. Mississauga had all the momentum going into the third, doubling up Barrie 32-16 in shots on goal.

Hardie and Schwindt caught Barrie on a bad line-change early in the third, playing give and go to give the Steelheads a one goal lead. Mississauga went to the powerplay on a Barrie tripping penalty with a chance to increase their lead, but it was the Colts Aidan Brown who burst up the ice for a shorthanded marker to tie the game at four, midway through the third. Barrie had a huge opportunity to take the lead late in the game, as Mississauga headed to the box for a high-sticking penalty. Regulation time would solve nothing, as both teams needed extra minutes to decide a winner.

The Steelheads were buzzing in the overtime period, with James Hardie registering multiple scoring chances during 3-on-3 action, but it was ultimately Brandt Clarke who scored his second of the game for the winner. Mississauga picked up a point in the standings in the overtime loss, as the race for first place continues to tighten.

2020 NHL Draft eligible prospect James Hardie set a new career-high with four points (1G, 3A) in the contest, while Florida Panthers prospect Cole Schwindt added three points (1G, 2A) of his own to extend his point-streak to eight games.