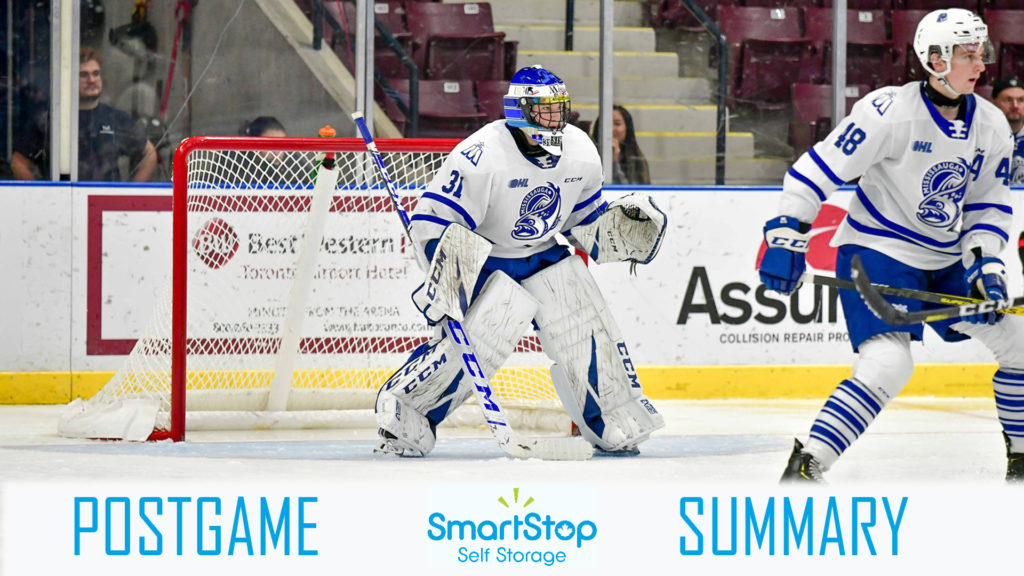 Kitchener, ON – The Kitchener Memorial Auditorium was buzzing in anticipation of the Mississauga and Kitchener matchup on Friday evening. The Steelheads and Rangers last played at the Paramount Fine Foods Centre on Superhero Day, where Cole Schwindt scored a natural hat-trick as Mississauga came back from a 4-1 deficit to win in overtime.

The Rangers got off to a quick start in the first period, as Mike Petizian left a drop pass for Declan McDonnell, who made one of the finer shots you’ll see to beat Kai Edmonds and make the score 1-0. Less than two minutes later, Jesse Fishman made a nice move to get around the Steelheads defence and find McDonnell, who suddenly had his second goal of the period, with Kitchener taking a two-goal lead. With the Steelheads in the penalty box, Riley Damiani was able to beat Edmonds up high to make it 3-0. Mississauga outshot Kitchener 14-8 in the period but trailed by three on the scoreboard heading into the second.

Kitchener native Cole Schwindt spoke about playing in his hometown in the first intermission “I grew up watching these guys, so it’s nice to be playing in this arena. I have a ton of family and friends here. Not the start that we wanted, but we just gotta stick to it and get back to what we do well. This is where we were at last time we played them in our barn, so we’re not out of it. There’s no quit in this locker room, we’ll be back for the second period.”

Mississauga nearly cut into the Rangers lead early in the second period, as Calvin Martin picked up the rebound on a shot from Keean Washkurak, but just missed an open net wide. Midway through the period, Canade find himself wide open in front of the net, but the door was shut by former Missisauga Steelhead Jacob Ingham. Declan McDonnell picked up a rebound and tucked it home for his first career hat-trick as the Rangers took a 4-0 lead. With the Steelheads on the powerplay, the Rangers found themselves in a 3-on-1 situation, taking advantage with a shorthanded goal from Michael Vukojevic to make it a five-goal lead. Kitchener would add one more, but it was Cole Schwindt who whacked home a rebound in front of his friends and family to get the Steelheads on the scoreboard before the end of the second.

The Fish were unable to score in the third, as the Rangers took this one by a final of 7-1. Cole Schwindt scored the lone goal in the loss to extend his point streak to nine-games, while Joe Ranger stopped 11/13 shots on goal in relief of Kai Edmonds. Former Steelheads goaltender Jacob Ingham stopped 39/40 shots in the win for Kitchener.

With a Sudbury Wolves loss to the Oshawa Generals, the Central Division standings will remain unchanged for another night. Sudbury will take on Barrie on Saturday night, as the Steelheads prepare for the final game of their weekend in Kingston on Sunday.