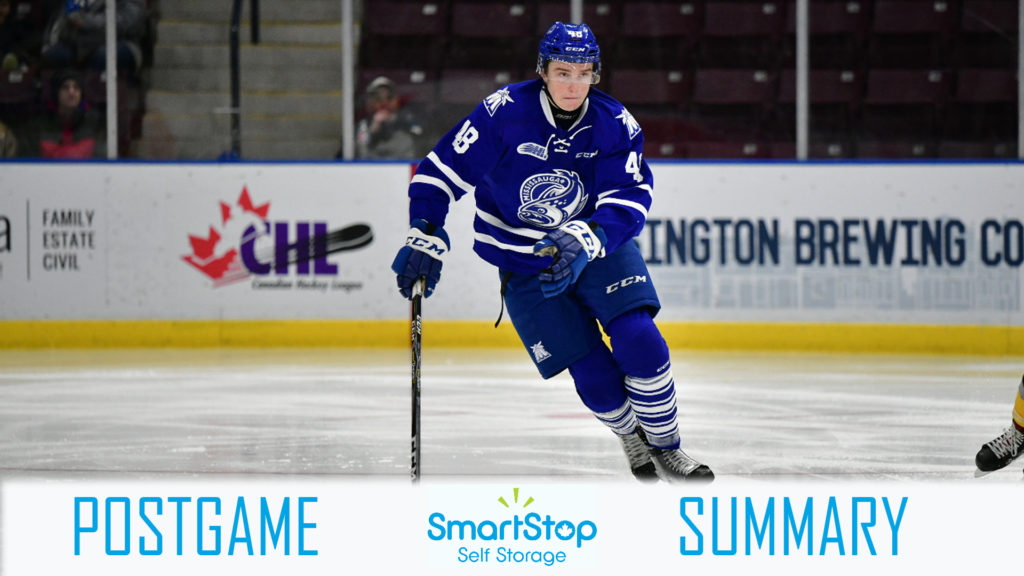 Guelph, ON – The Mississauga Steelheads travelled to the Sleeman Centre to take on the Guelph Storm on Sunday afternoon.

The Storm opened the scoring, as Andrei Bakanov took advantage of a giveaway in front of the net, beating Kai Edmonds. Keean Washkurak had a prime opportunity to tie the game, one-timing a rebound off an Aidan Prueter shot, but was denied by Nico Daws. Guelph added to their lead as Keegan Stevenson picked the puck up off a face-off and fired a shot short-side past Edmonds. Mississauga headed to the locker room trailing 2-0.

Following the first period, Thomas Harley gave his thoughts on the teams play “I thought we were a little sloppy in the defensive zone, we got our chances offensively, if we clean it up we’ll be just fine”.

With the Steelheads in the penalty box, Guelph added to their lead in the second period with Pavel Gogolev ringing a shot off the inside of the post. The Fish would have an opportunity to climb back in the game with Guelph taking a too many men penalty, but couldn’t find a way to sneak one past Daws. At the end of the second period, Mississauga trailed by a score of 3-0.

Ty Collins picked up a rebound in front of the net off a point shot from Zack Terry to it 4-0 midway through the third period. The Steelheads would battle hard putting 14 shots on net in the frame, but couldn’t buy a bounce. Guelph would hold on to win by a score of 4-0. Kai Edmonds made 24 saves in the effort, while Cole Schwindt went 15/23 on face-offs.

The Steelheads will return to the Paramount Fine Foods Centre on Friday, November 1st to take on Arthur Kaliyev and the Hamilton Bulldogs. Tickets can be purchased by visiting the Box Office, online through ticketmaster.ca or by calling 905-502-9100.