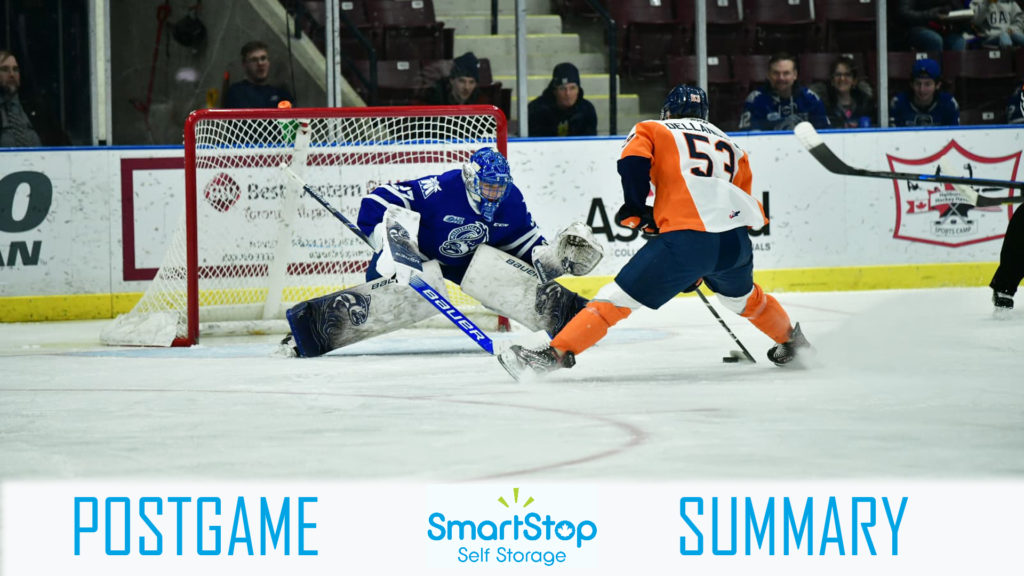 Mississauga, ON – The Mississauga Steelheads kicked off the weekend with a home game against the red-hot Flint Firebirds on Friday night. The Firebirds came into the game having won 14 games in a row.

Flint opened the scoring on the powerplay seven minutes into the first period, as on a 6-on-4 with a delayed penalty upcoming, Riley McCourt wired a wrist shot top shelf on Kai Edmonds. St. Louis Blues prospect Tyler Tucker made the score 2-0 as he beat Edmonds low on a hard wrist shot from the blue line. At the end of the first period, the Steelheads trailed by a pair while Edmonds stopped 16 shots on goal.

After back and forth play to start the second period, Marcus Gretz increased the Firebirds lead to three as he went bar down from the point. With Mississauga in the box for tripping, Cody Morgan picked up the rebound on a shot from Owen Lalonde and made a cross crease pass to rookie Brennan Othmann, who was able to find the back of the net to make it 4-0. It was defenceman Duncan Penman who took control of the play for the Fish, dangling around Flints defence and goaltender Anthony Popovich, scoring a beautiful goal to cut the Steelheads deficit to three with time winding down in the second. With the goal, the Steelheads had life going into the third.

William Portokalis sniped off the post and in just a few minutes into the third, as the Fish looked to mount a big comeback, cutting the lead to two goals. The Steelheads had a prime opportunity to continue to cut into the lead, as Charlie Callaghan drew a holding penalty midway through the period, but the powerplay was unable to score. With five minutes to go, James Hardie crashed the net hard with Keean Washkurak burying the rebound as the Steelheads were suddenly within one. Mississauga had all the momentum, with multiple dangerous scoring chances, as they continued to press hard to find the tying goal. Flint answered back to seal the game, on a broken rush leading to a goal from Jack Wismer to make the score out of reach. The Steelheads would push hard, but ultimately fall by a final score of 6-3.

The Steelheads will return home on Sunday to take on their divisional rivals, the Barrie Colts, in the Mental Health Awareness game in partnership with CMHA Peel Dufferin, as presented by Teachers Life. Tickets for the game are still available, starting from $19. For ticket information, contact please visit the Box Office, purchase online through ticketmaster.ca or by calling 905-502-9100.