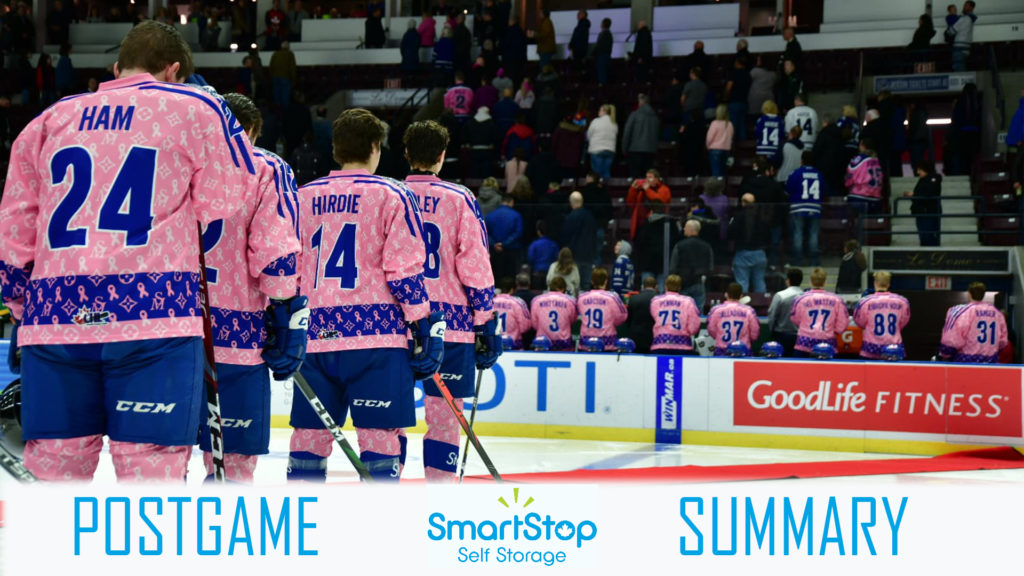 Mississauga, ON – The Mississauga Steelheads took on the London Knights in their 8th annual Pink at the Rink game on Thursday night. Prior to the game, the Steelheads honoured 11 cancer survivors and announced that Nic Canade had raised a grand total of $16,000 for the Canadian Cancer Society.

The game got off to a quick start, as the teams played six minutes before a whistle. Calvin Martin opened the scoring for the Steelheads, as he tapped in a rebound off a shot from Liam Ham. London thought they had scored the tying goal, but upon a lengthy review from the officials, it was ruled the puck had not crossed the goal-line. Mississauga made the score 2-0, as Luca DelBelBelluz danced around London’s defence and made a nice pass to Cole Schwindt, who was able to beat Dylan Myskiw. London cut the lead in half on the powerplay late in the first, on a goal from Ryan Merkley. At the end of the first, the Steelheads lead by a score of 2-1.

London tied the game midway through the second, as Liam Foudy was able to walk around Kai Edmonds, tucking one in an open net. Mississauga went to the powerplay midway through the second, as London was called with closing the hand on the puck. The Steelheads special teams went to work, but the powerplay was negated as a slashing penalty put the play at 4-on-4. With just three seconds remaining, Ryan Merkley put the Knights up by one. The Steelheads headed into the third looking for a comeback.

Mississauga controlled the play throughout much of the third period, outshooting London 7-3 at the midway point. A too many men penalty would slow the Steelheads momentum, and Alec Regula would capitalize for London as he was able to beat Edmonds up high. Liam Foudy would add an empty netter to seal the victory for London, as Mississauga would fall by a score of 5-2.

Following the game, Nic Canade spoke about his $16,000 fundraiser for the Canadian Cancer Society “I went into this week hoping to double last years total, and everything worked out great with the support of the hockey community. We had a few big donations from some local companies which was great.”

The Steelheads wore special Pink at the Rink uniforms during the game, available for auction here, with all of the auction proceeds going to the Canadian Cancer Society.

The Steelheads will head on the road to take on the Ottawa 67’s on Saturday afternoon, in a game that will be nationally broadcasted on Sportsnet. The weekend will wrap up as the team will travel to Kingston on Sunday to take on the Frontenacs. Mississauga will return home on Wednesday, November 27th at 11:00 AM, as the Steelheads play Guelph in their annual School Day Game. Tickets to the game can be purchased by visiting the Box Office, online through ticketmaster.ca or by calling 905-502-9100.