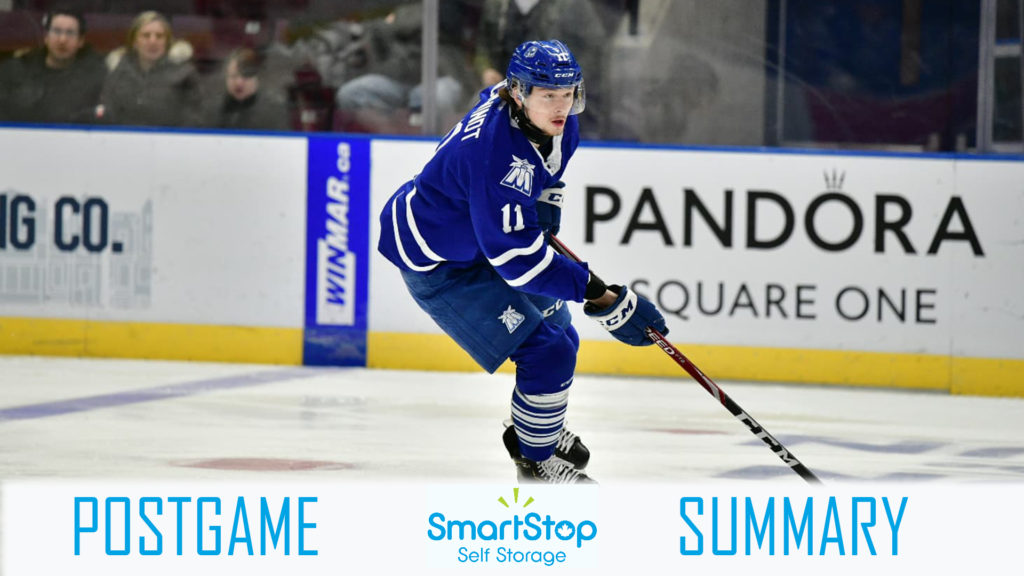 Mississauga, ON – The Mississauga Steelheads took to the ice on Valentine’s Day as they hosted the Ottawa 67’s. Richard Whittaker made his return to the lineup for the first time since January 31st.

The Steelheads got off to a lead in the first period thanks to Charlie Callaghan, who fired a shot top corner picking up his second goal of the OHL season. Richard Whittaker recorded an assist on the play in his first game back from an injury, while Cole Schwindt registered a secondary assist extending his point streak to eleven games. Mississauga thought they took a two-goal lead late in the first, but the referee ruled the puck did not cross the line. At the end of the first, the Steelheads led 1-0 while outshooting Ottawa 16-5.

Callaghan scores his second of the season and the first goal of the game!#SteelTheShow #MISSvsOTT pic.twitter.com/fq19v53Yfw

With the Steelheads on the powerplay midway through the second, Keean Washkurak entered the offensive zone and wired a shot past the glove hand of Cranley to make the score 2-0. Mississauga controlled the play throughout much of the second period, however, a nice tic-tac-toe passing play between Marco Rossi, Noel Hoefenmayer and Joe Garreffa cut the lead to a goal. With under two minutes remaining, Garreffa took advantage of a Steelheads turnover in the offensive zone and placed a perfect shot past Edmonds to tie the game at two. Mississauga and Ottawa were tied in a deadlock heading into the final frame.

A few minutes into the third, Ottawa turned a turnover into a 2-on-1 opportunity with Mitchell Hoelscher knocking the rebound past Edmonds to give the 67’s their first lead of the game. Ottawa increased their lead to two goals, as Austin Keating buried a 3-on-1 on the powerplay. The Steelheads continued to fight despite being down by a pair, with Whittaker burying a one-timer on centring pass from Washkurak. No less than twenty seconds later, Schwindt found James Hardie streaking down the wing on an odd-man rush, who sniped top shelf on Cranley as it was all of a sudden tied up at four. The Fish continued to press, as the momentum was entirely in their favour. Washkurak deflected a shot from the point from Charlie Callaghan that bounced past Cranley to give the Steelheads a one goal lead with nine minutes to go.

The 67’s would not go down without a fight, as Rossi put a light shot on net in the midst of heavy traffic that snuck it’s way past Edmonds to tie the game at five. With three minutes remaining, Hoefenmayer found a bouncing puck in front of the Steelheads net and tucked it past Edmonds as the 67’s regained the lead. Ottawa would hold on to beat Mississauga by a final score of 6-5.

Following the game, Steelheads Head Coach and General Manager James Richmond offered his thoughts on tonight’s effort “I thought we stuck with the game plan for two periods. That’s the best team in Canada that we kept under 10 shots for two periods, we played really well, but we had a bad turnover in the neutral zone that ended up in our net.”

The Steelheads will hit the road for a game on Sunday against the North Bay Battalion, before returning home for a Family Day afternoon game on Monday against the Erie Otters. Be sure to arrive to the game early as the first 1000 fans will take home Thomas Harley bobbleheads. After the game, don’t forget to bring your skates as there will be a skate and autograph session with your favourite Steelheads players. For tickets, please visit the Box Office, purchase online through ticketmaster.ca or by calling 905-502-9100.