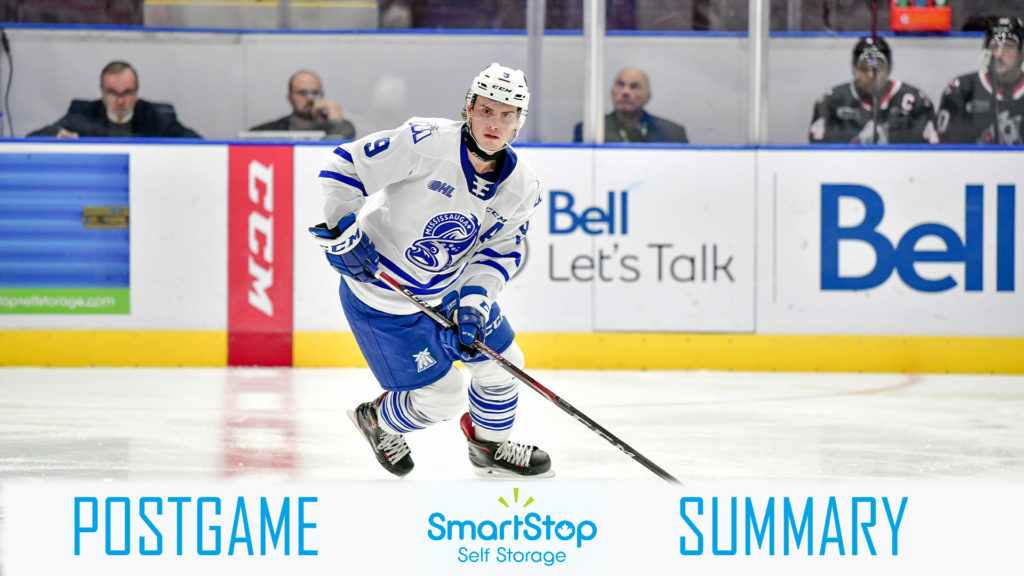 Mississauga, ON – The Mississauga Steelheads took on the Sudbury Wolves in their 3rd annual Pucks ‘N’ Paws game on Sunday afternoon.

After trading powerplays to start the game, the Steelheads got on the board first, as Calvin Martin picked up the rebound off a shot from Liam Ham to make the score 1-0. Sudbury answered back quickly, as David Levin picked up the puck off the rush and took a shot that fluttered over the glove hand of Kai Edmonds. Just under a minute later, Martin forced a turnover in Sudbury’s zone, and it was Keean Washkurak who found Prueter in front of the net to make the score 2-1. With the Steelheads on a 5-on-3, Cole Schwindt capitalized, as he roofed a shot from the goal line to give the Fish a two-goal lead. Mississauga’s offence continued to buzz, as Schwindt found Washkurak in the slot for a one-timer past Mitchell Weeks. At the end of the first, the Steelheads had a large 4-1 lead, with Liam Ham and Keean Washkurak both recording three points in the frame.

Mississauga didn’t slow down in the second period. Martin tucked home a one-timer from Prueter for his second of the game, to put the Steelheads up by four. Just as he was getting out of the penalty box, Ole Bjorgvik-Holm entered the offensive zone with the puck and ripped a wrist shot past the glove of new Wolves goaltender Christian Purboo to make the score 6-1. Mississauga increased their lead to six, as Cole Schwindt drew the defender in off the rush opening up space to find James Hardie, who sniped one on Purboo. Mississauga led 7-1 at the end of the second, with Keean Washkurak, Aidan Prueter and Calvin Martin on pace for a record-breaking game.

If you blink you might miss it. The quick-release from Hardie adds another!#SteelTheShow #MISSvsSBY pic.twitter.com/1mt2tswddV

Washkurak continued the scoring in the third, as he forced a Sudbury turnover and wired a shot past Purboo for his sixth point of the game, tying a Steelheads record for points in a game set previously by Michael McLeod, as well as his 100th career OHL point. With an assist on the play, Aidan Prueter registered his fourth point of the night marking a career-high. Max Dodig found Calvin Martin on a 2-on-1, making no mistake beating Purboo for the first hat trick of his OHL career and a new career-high for points in a game with four. Michael Stubbs added one more before the end of the game to put the Steelheads into double digits. The Steelheads held on for their biggest victory of the season, by a final score of 10-3.

With the win, the Steelheads move just two points behind the Wolves for first place in the Central Division.

Following the game, Keean Washkurak spoke about the Steelheads big win “Coming in, we thought it was going to be a hard game. It’s always tough to play against division rivals, they came out hard, but we came out even harder, and pucks kept going in the net. They have a lot of key players on their team, we had to stay on them and stay focused, we just kept coming at them and pucks kept going in.”

Check out some post-game interviews with Coach James Richmond and Keean Washkurak after a big win against Sudbury!

The Steelheads will hit the road next weekend for three games against the Barrie Colts, Kitchener Rangers and Kingston Frontenacs, before returning to the Paramount Fine Foods Centre on Friday, February 14th as we take on the Ottawa 67’s. For tickets, please visit the Box Office, online through ticketmaster.ca or by calling 905-502-9100.