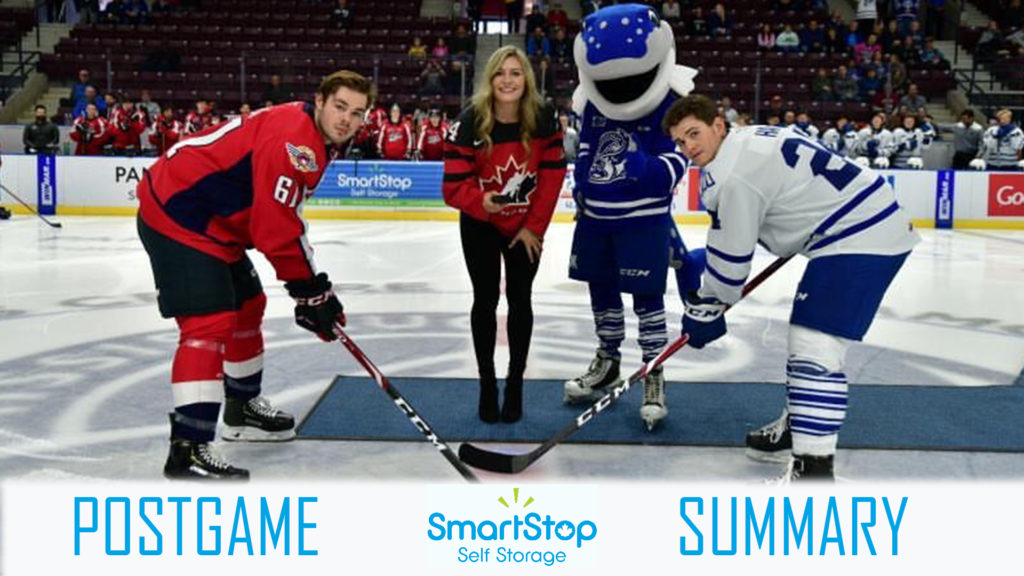 Mississauga, ON – The Mississauga Steelheads took on the Windsor Spitfires at the Paramount Fine Foods Centre Sunday afternoon in a back and forth game.

The Spitfires opened the scored on the powerplay as Tyler Angle took a wrist shot from the faceoff circle that snuck past Steelheads goaltender Kai Edmonds. Later in the frame it was Thomas Harley who led an odd-man rush and fired a shot inside the far post to quickly tie the game at one. Windsor would answer back minutes later, as a breakout pass from Dylan Robinson found Kyle McDonald for a breakaway, who made no mistake. At the end of the first period, the Spitfires led the Steelheads by a score of 2-1.

A minute into the second period James Hardie sniped a wrist shot under the crossbar, which tied the game at two. The Steelheads went on back to back powerplays and had numerous chances to score, but the door was shut by Spitfires goaltender Kiro Piiroinen. Mississauga’s powerplay then capitalized on their third opportunity of the period on a tic-tac-toe passing play finished by Cole Schwindt to give the Fish their first lead of the game. Windsor would answer back quickly as Cole Purboo found Egor Afanasyev on a quick pass in front of the Steelheads net. With seconds remaining in the period, a streaking Nick Isaacson would draw a hooking penalty to set Mississauga up with a powerplay heading into the third.

The Fish couldn’t put one past the Spitefire’s netminder on the man advantage and Kai Edmonds made some huge pad saves to rob Curtis Douglas and keep the game tied to start the third. After another Windsor penalty, the Steelheads capitalized as Hardie picked up a rebound on a low shot from Nicholas Canade and made no mistake in tucking it home to put the Steelheads up by one with just over ten minutes to play. The Steelheads would ultimately hold onto the lead defeat the Spitfires by a score of 4-3.

Steelheads Head Coach and General Manager James Richmond said the following after the game “Del Mastro might not be on the official stat sheet, but he’s on our stat sheet in terms of how many plays he breaks up, how quickly he’s able to transfer something against us into something for us. He was a beast out there for us. He was real good.”

The Steelheads will head to Ottawa on Friday before returning to the Paramount Fine Foods Centre for a game against the Sudbury Wolves on Sunday, October 13th. Tickets can be purchased by visiting the Box Office or by calling 905-502-9100.