Special Team Shine as Steelheads Open 2018 With a Win 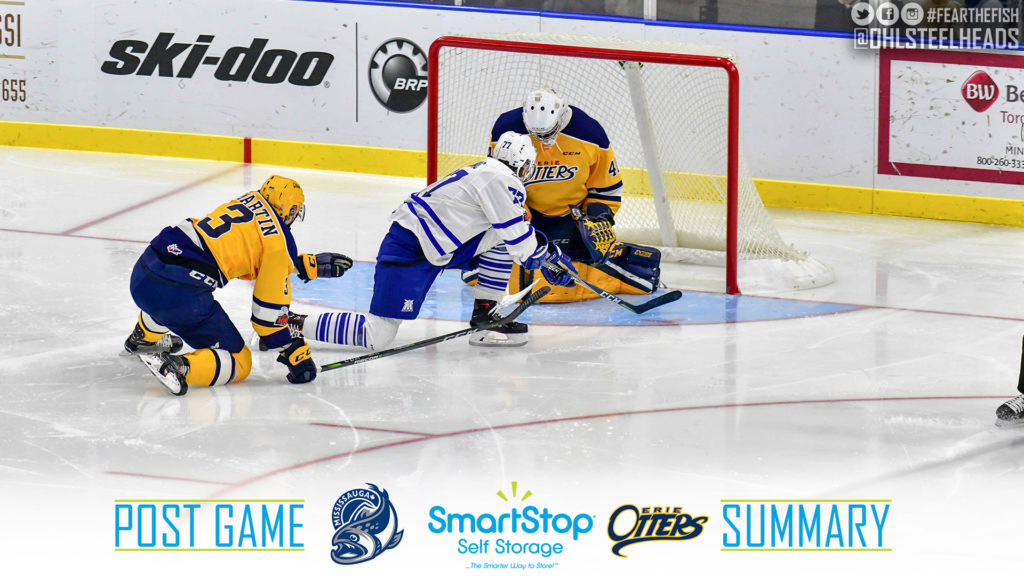 Looking to start the New Year off in the right direction, the Steelheads visited their cross border foes from Erie, marking the 2nd rematch of the season against the OHL Champions from last season.

With both teams settling in early, the Steelheads would be the first to pounce as Owen Tippet scored his 11th of the season at 6:28 of the 1st period to put the Steelheads up 1-0. TIppett, a Florida Panthers draft pick, showed off his NHL shot with an absolute laser on the powerplay. Assists on Tippett’s goal went to Ryan McLeod and Matt Foget, who collected his 1st point as a Steelhead after being acquired in a trade on Jan 1st. Despite not getting their first shot on goal until the 2nd half of the period, Erie took advantage of the shots they did get, capitalizing on a Steelheads turnover at 12:17 to tie the game up. Both teams had chances but the period ended 1-1. Shots on goal after the 1st were 11-3 in favour of Mississauga.

As if they only needed a period to get warmed up, the Steelheads exploded for 4 goals in the 2nd to increase their lead to 5-1. The Steelheads scored at even strength, short handed and on the power play (twice) to put themselves in the drivers seat heading into the third. Tippett scored his 2nd of the game and 12th of the year to get things started, with McLeod and Trent Fox adding PP markers. Foget scored his 1st as a Steelhead, finishing off a nice pass in front for a short-handed marker. When the dust settled, Steelheads led 5-1 after 40 minutes. Shots on goal were 22 – 13 in favour of Mississauga.

Erie came out with some jump in the third and had a number of good chances early on and were rewarded with 2 quick goals, just 10 seconds apart to close the gap to 5-3. Steelheads goalie Jacob Ingham was able to refocus and right the ship, making a number of key saves down the stretch and close out the win for the Steelheads. Final score 5-3, shots on goal, 27-25 in favour of Erie.  Five Steelheads players collected 3 points on the night, including newcomer Matt Foget  (1G , 2A) who showed good chemistry with linemate Tippett (2G, 1A)

The Steelheads are back at home on Thursday, January 4th as the take on the CHL’s top team, the Soo Greyhounds, who currently sport a 23 game win streak. Tickets are still available online or at the Hershey Centre box office.