Spitfires double up on Steelheads 4-2 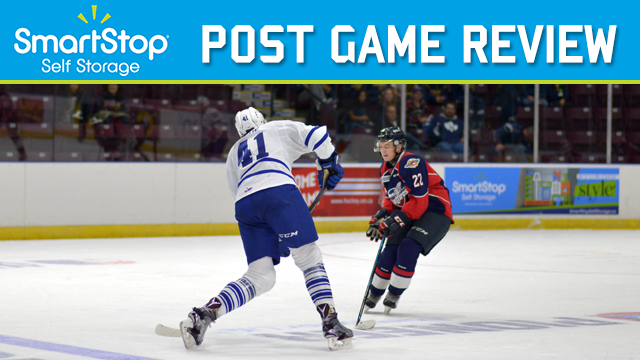 Mississauga travelled to Windsor Thursday for their first road game of the season, hoping to bounce back from their previous meeting that saw the Steelheads lose 7-0 to the Spitfires in their season opener. The Steelheads were fully staffed for the first time this season as they welcomed Sean Day back to the line up, who returned from the New York Rangers camp. Nathan Bastian opened the scoring and the Steelheads looked poised to get back in the win column, however a power play goal and empty-netter late in the game allowed the Spitfires to double up on Mississauga in a 4-2 final.

The opening frame was a closely fought battle, as both teams exchanged a number of good chances. Matthew Mancina was the difference as the Spitfires edged Mississauga in shots on goal 13-3 in the opening frame. The game remained scoreless heading into the first intermission.

Things took off in the second as the pair of New Jersey Devils prospects, Nathan Bastian and Michael McLeod, broke out on shorthanded 2-on-0 and made no mistake beating Michael DiPietro on the give and go. The goal was Bastian’s third of the season, while McLeod picked up his third assist. Minutes later, Gabe Vilardi and Jeremiah Addison nearly re-created the McLeod-Bastian goal to get the Spitfires on the board and even the score 1-1. Nearing the end of the middle frame, Logan Brown gave Windsor their first lead of the game, only to have it taken away seconds later by Damian Bourne who fired a one-timer past DiPietro to keep the game locked at 2 heading into the final frame. Jacob Moverare picked up the lone assist on Bourne’s first of the season.

Jeremiah Addison was the story in the third, netting a power play goal at 3:22 from Brown and Vilardi to regain Windsor’s lead. DiPietro made a number of key saves to preserve the Spitfires’ lead, so with time winding down, the Steelheads pulled Mancina in favour of an extra-attacker. Addison sealed the victory with an empty-net goal at 19:30 as Windsor recorded their second win over the Steelheads to sweep the season series.

The Steelheads are back in action tomorrow to host the Flint Firebirds at the Hershey Centre for a 7 PM start. Be sure to follow us on Twitter, Facebook and Instagram to stay up to date with all things Steelheads!