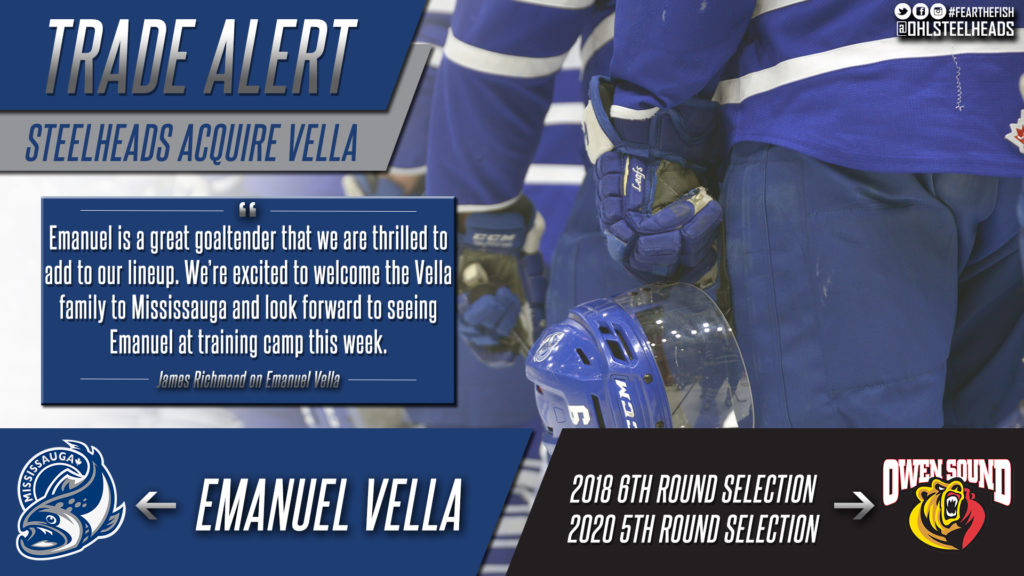 Mississauga, ON – The Mississauga Steelheads are pleased to announce the acquisition of goaltender, Emanuel Vella from the Owen Sound Attack. In exchange for Vella, the Attack will receive a sixth-round pick in the 2018 OHL Priority selection, as well as a fifth-round pick in 2020.

Vella was selected by the London Knights in the third round (47th overall) of the 2014 OHL Priority Selection. The 6’4, 190lb, Toronto, Ont., native was on NHL Central Scouting’s players to watch list in September 2015, but saw limited action behind Knights’ number one starter, Tyler Parsons. Vella was traded to Owen Sound in November last season. He appeared in eight games for the Attack, posting a 5-2-0-0 record, a 3.21 goals-against-average and a 0.863 save percentage.

Mississauga Steelheads head coach and general manager, James Richmond is pleased to welcome Emanuel to the organization, adding “Emanuel is a great goaltender that we are thrilled to add to our lineup. We’re excited to welcome the Vella family to Mississauga, and look forward to seeing Emanuel at training camp this week.”