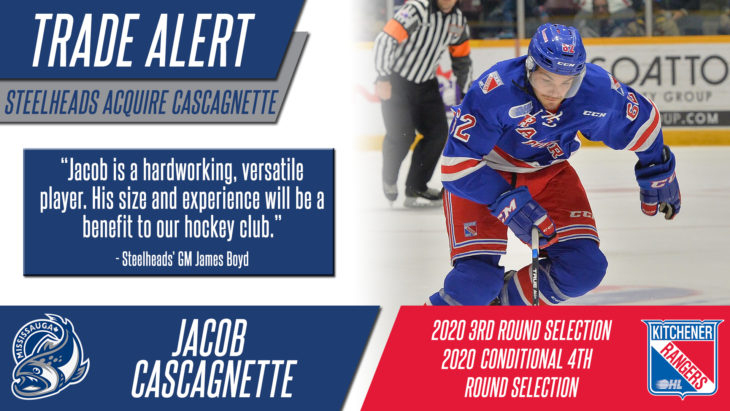 On the eve of the OHL trade deadline, the Mississauga Steelheads announced that they have acquired forward, Jacob Cascagnette from the Kitchener Rangers in exchange for a third round selection in the 2020 OHL Priority Selection, as well as a conditional fourth round selection in 2020.

Cascagnette, a native of Kitchener, Ontario, has recorded 13 points (six goals, seven assists) so far this season with the Rangers, including his first two-goal game of his OHL career on October 7 against Sarnia. Over the course of four seasons in Kitchener (140 regular season games), Cascagnette has totaled 30 points (12 goals, 18 assists). At 6’3”and 209 pounds, Cascagnette is a strong forward who is effective on the faceoff and penalty kill. “Jacob is a hard working versatile player, said Steelheads’ General Manager, James Boyd. “His size and experience will be a benefit to our hockey club.”

The Steelheads would like to welcome Jacob and his family to the organization.