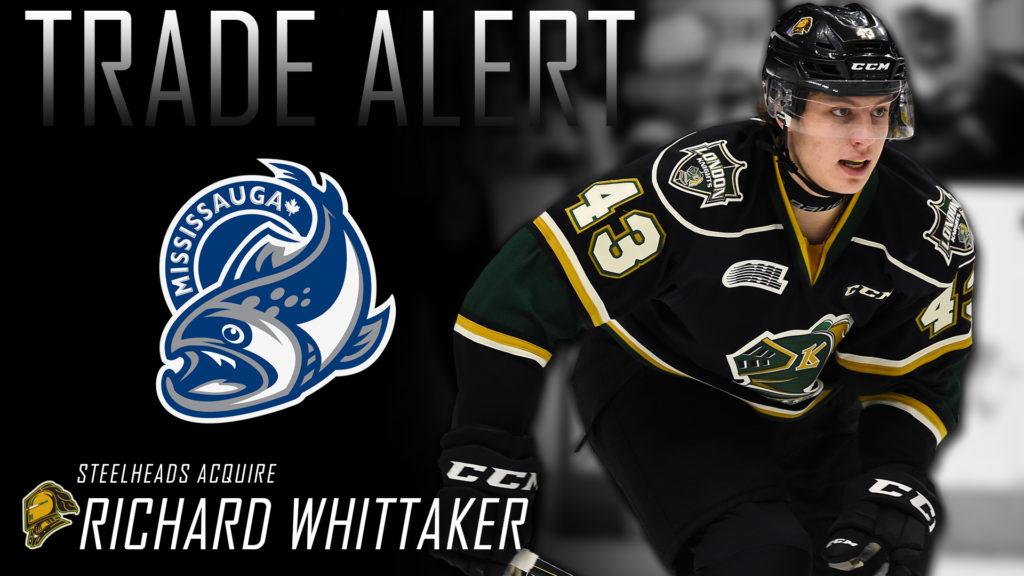 The Mississauga Steelheads announced Monday that the team has acquired forward, Richard Whittaker from the London Knights. In exchange for Whittaker, the Knights receive a fifth round selection in the 2019 OHL Priority Selection.

Whittaker, a native of Holland Landing, Ontario was selected by the London Knights in the fourth round (69th overall) of the 2016 OHL Priority Selection. During the 2015-16 season, Whittaker recorded 44 points in 30 regular season games with the York Simcoe Express Minor Midget AAA, and contributed four points in seven games to help lead the Express to their 2015-16 OHL Cup Championship title. In 2016-17, the 6’0”, 182 lb left winger started the season with the London Knights where he recorded three points in 11 games before heading to the Greater Ontario Junior Hockey League to finish out the season with the London Nationals. In 45 regular season games with the Nationals, Whittaker recorded 30 points (11 goals, 19 assists).

During the 2017-18 season, his first full season in the OHL, Whittaker recorded 13 points (five goals, eight assists) in 54 regular season games, adding a goal in four postseason games. So far this preseason, Whittaker has recorded a goal and an assist in two games with London.

We are thrilled to welcome Richard and the Whittaker family to the Steelheads and look forward to continuing his development in Mississauga.