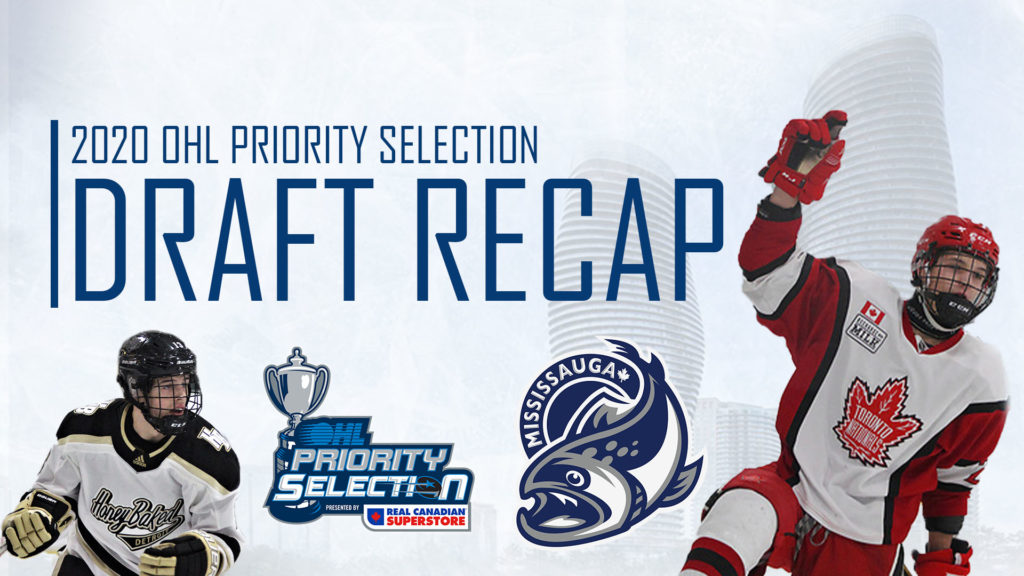 MISSISSAUGA, ON – The Steelheads added 13 players to the organization; including 8 forwards, 4 defencemen and 1 goalie in Saturday’s 2020 OHL Priority Selection Presented by Real Canadian Superstore.

With the 7th overall pick in the draft, the Steelheads selected high-scoring winger, Zakary Lavoie of the Toronto Nationals. In 68 games with the Nats this season, Lavoie notched 51 goals to go alongside 35 assists for a team-high 86 points. Steelheads GM & Head Coach, James Richmond describes Lavoie as “a dynamic right winger that loves to score goals.” He adds “Our scouts watched him play all year and he showed that he was a consistent offensive threat every game. Zak has the speed that will transition well into the OHL game and especially into how the Steelheads like to play.

Richmond turned to the OMHA for both of the club’s second round picks, selecting Owen Beck 29th overall and Carson Christy with the 38th pick. In 34 games with the Quinte Red Devils, Beck posted 19 goals and 39 points. Christy led the OMHA in goals this season, posting 41 tallies in just 36 league games to go along with 21 helpers.

When asked about the two second round selections, Richmond described Beck as “a strong, right shot centreman that plays a smart 200’ game. He plays up and done the middle of the ice and makes smart hockey plays.” As for Christy, “Carson scored over 60 goals in his minor midget year and we believe he can score in the OHL. He plays with speed and drives the net really well. We are excited to see Carson in the blue and white soon.”

Before a break in the action, the Steelheads selected Zander Veccia with the 3rd pick of the third round (43 overall). The hard-nosed London-native registered 46 points (20G, 26A) in 29 games for the Alliance-leading Elgin Middlesex Chiefs. Richmond described Zander as “a guy who plays a fast, hard game. He’s difficult to play against every shift. He played on a top minor midget team in Elgin Middlesex, played on their top line and scored on a consistent basis.”

In the 7th round, the Steelheads added their first defenceman of the day, selecting Dylan Gordon out of the Detroit Honeybaked program. In 60 games, Gordon posted 55 points including 14 goals from the back-end this season.

Between the pipes, the Steelheads selected Ben Behrens in the 11th round. The St. Louis AAA Blues product was an USNTDP camp invite this spring and certainly fits the mold of a modern goaltender, standing at 6’1″.

After a successful day in the War Room, Steelheads GM, James Richmond adds, “Congratulations to the ‘04 Draft Class and welcome to the Mississauaga Steelheads! I’d like to thank the entire Steelheads scouting staff for all their hard work throughout the year. Our staff, headed by Mike Doyle, Rob Toffoli and Jeff Kyrzakos did an excellent job of preparation leading up to the draft. We believe we selected thirteen players today that one day could be playing for our hockey club. We addressed all of our needs for the immediate future and have grown our player depth as an organization at the same time. We want everyone to stay safe and healthy as we all fight together through these unprecedented times.”