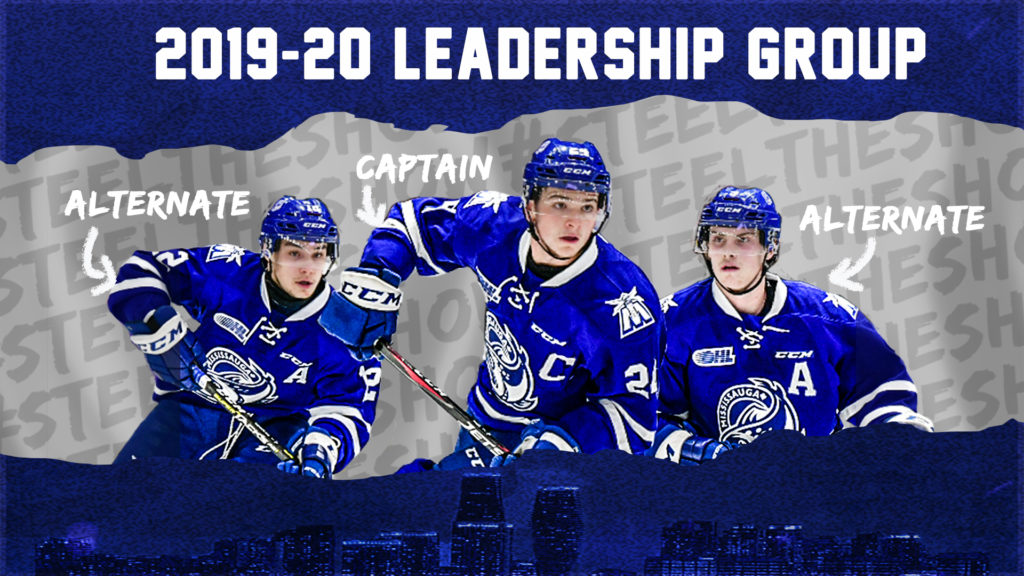 The Mississauga Steelheads proudly announced their leadership group for the 2019-20 season on Tuesday. Veteran defenceman Liam Ham will Captain the hockey club while Nicholas Canade and Keean Washkurak will serve as Assistant Captains.

General Manager and Head Coach James Richmond commented on his new leadership team. “We are pleased to announce our 2019-20 Captains. Liam Ham will wear the “C”, Nicholas Canade and Keean Washkurak will wear the “A’s”. We have a ton of character in our dressing room and quite honestly there are a number of players the coaches will be leaning on for leadership this season. Liam, Nicholas and Keean are all true leaders on and off the ice and they will all be tremendous reflections of what a Steelhead is. We would like to congratulate all three of these players on this accomplishment and we all look forward to a great season.”

Liam Ham played his minor hockey for the York Simcoe Express of the Eastern Minor Midget Hockey League and was one of the league’s top defencemen with 27 points in 32 games. Ham would go on to be selected by Niagara IceDog’s in the sixth round (113th overall) on the 2015 OHL Priority Selection. The Newmarket, Ontario native made the Niagara IceDogs roster the following year, where he would spend the next two and half seasons, before a trade ultimately landed him wearing the blue and white. After being acquired midway through the 2018-19 season, Ham put up strong numbers, recording 30 points (8 goals, 22 assists) in 41 games for the Steelheads. He was ranked in a tie for 2nd as the best defensive defenseman in the year-end OHL Coaches poll, a testament to his on-ice play in both ends of the ice.

Ham spoke about the honour of wearing the “C” and becoming the seventh captain of the franchise. “I am honoured to be selected by our coaching staff as captain to represent our team this year. We have a very tight knit group that works hard and loves to play together. Along with Keean and Nick who also will be representing our team as leaders we are very focused on having a long and successful year.”

Nicholas Canade will be an Assistant Captain for the second year in a row. As an Assistant Captain of the 2018-19 Steelheads he showed his dedication and leadership both on and off the ice. Canade was recognized at the end of the season as the OHL’s Humanitarian of the Year, an award which recognizes a player that demonstrates himself as an outstanding role model in the community.

Keean Washkurak had a breakout season in 2018-19 where he put himself on the radar of NHL scouts, registering 47 points (16 goals, 31 assists) in 66 games. He was selected to play for Team Canada at the 2019 U18 World Junior Championship and was recognized as the OHL Western Conference’s Hardest Working Player in the annual Coaches Poll. The St. Louis Blues 5th round selection leads by example with his fast and physical style of play.