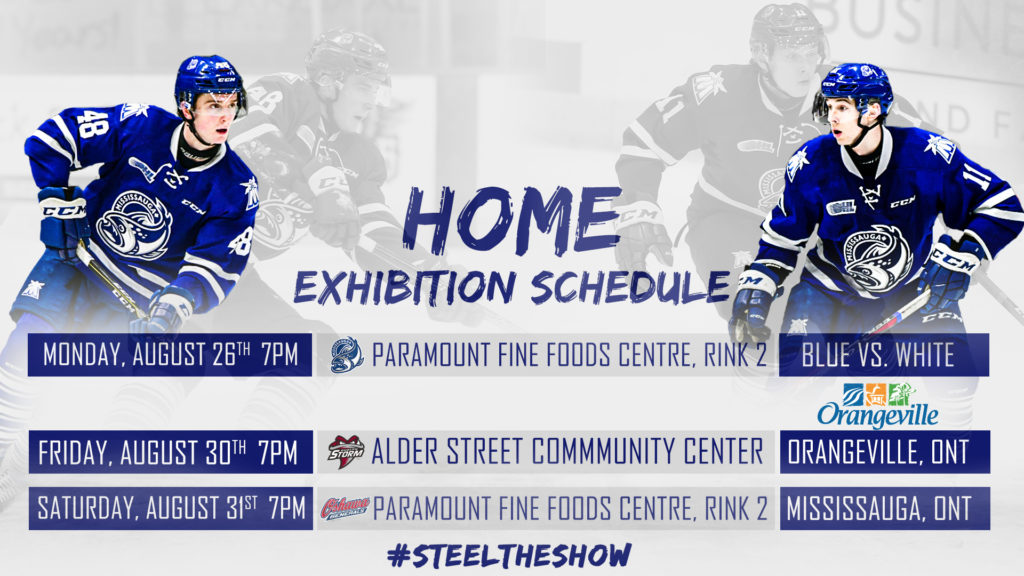 MISSISSAUGA, ON – The Mississauga Steelheads Hockey Club has announced further details on their 2019 home exhibition schedule. Over the Labour Day weekend, the team will play back-to-back games on Friday and Saturday night.

On Friday, August 30 at 7 p.m., the team will be playing host to the reigning OHL Champion, Guelph Storm at the Alder Recreation Centre in Orangeville. This event marks the first time that the hockey club has held a game in the Orangeville area. Admission to the game will be free of charge, thanks to the support of the following partners; Jerry Gould REMAX, Plumbs Up Plumbing, Humber College (Orangeville), and Geoff Del Grande/The Mortgage Centre. In-game events to look forward to include a Tim Horton’s mini-game with Orangeville Minor Hockey players, a Chuck-A-Puck with proceeds going to a charity TBD and a post-game autograph signing with Steelheads players.

Mississauga Steelheads Owner & President, Elliott Kerr spoke about hosting the exhibition game outside Mississauga, “As the only OHL team in the GTA, this will be a great opportunity to showcase elite hockey in another community. The team could not be happier with the support we have received from the Town of Orangeville and we look forward to putting on a show for the fans!”

Town of Orangeville Mayor, Sandy Brown expressed the Town’s support for the event, “We are fortunate to be hosting an OHL exhibition game between OHL Champion Guelph Storm and the Mississauga Steelheads.  Generous sponsors have allowed us to bring this game to our Alder Recreation Centre – with FREE ADMISSION!  We look forward to kicking off the upcoming hockey season with this blockbuster game.  Please come out and see some future World Junior and NHL stars play in Orangeville! “

The Steelheads’ second exhibition game will be held the following day on Saturday, August 31 at the Paramount Fine Foods Centre on Community Rink 2, when the team plays host to the Oshawa Generals. Fans can enter through Arena B | Gate 3 which is located on the south-east side of the main bowl. Admission for the general public will be $5 upon entry with no assigned seating.

Steelheads Training Camp gets underway in a couple weeks and fans will have the chance to get their first look at the hockey club’s prospects and returnees at the annual Blue and White Game. As in past seasons, the game will be held at Paramount Fine Foods Centre, Community Rink 2, at 7 pm and admission will be free of charge. For more information, contact a Steelheads representative at 905-502-7788 or visit www.misssissaugasteelheads.com