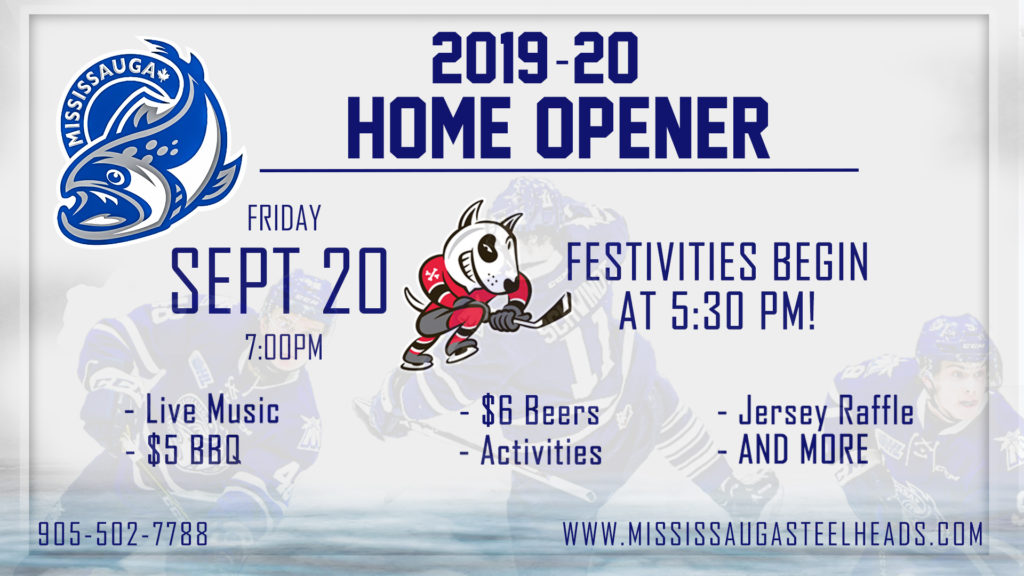 MISSISSAUGA, ON  – The Mississauga Steelheads open their 2019-20 campaign on home ice when they play host to the Niagara IceDogs on Friday September 20th at 7 pm. The team went (3-3-0-0) against the IceDogs last season including a (2-1-0-0) record at the Paramount Fine Foods Centre.

The Steelheads will be looking to build off their second half run that saw the team finish fifth in the Eastern Conference just a year ago. Players returning this season include three 2019 NHL draft picks; Thomas Harley, Cole Schwindt and Keean Washkurak and a veteran returning group including Liam Ham, Nick Isaacson and Nicholas Canade. The team will also feature some new faces in the line-up including 2019 first round picks Ethan Del Mastro (OHL Priority Selection) and Ole Bjorgvik-Holm (CHL Import Draft), off-season acquisitions Hayden Davis and Kai Edmonds, and rounding out the current roster are rookies Michael Stubbs, Max Dodig, Luca DelBelBelluz, Craig Spence and Chas Sharpe.

Fans will have more to look forward to than just on-ice action on September 20th as the hockey club looks to celebrate the start of the season with pre-game festivities outside the Paramount Fine Foods Centre. The Steelheads tailgating experience, set up just outside the main gates, will provide a multitude of entertainment and menu options for fans of all ages. Country singer Paige Rutledge will kick things off with live music starting at 5:30 PM; Sauga 960’s Mike Richards and Dave Bastl will preview the season ahead for the fish with a remote access broadcast, and Paramount Fine Foods will have the BBQ’s firing with a can’t resist $5 food menu and beer priced at just $6. For the kids, there will be a number of games and activities including an interactive shooting contest where they can test their skills shooting on Sauga and be entered for a chance to win a team signed jersey.

On top of all that, the Home Opener is a Winning Night meaning that if the Steelheads win, those in attendance can redeem their tickets at the Paramount Fine Foods Centre box office for a free ticket to the game on November 1st. More info on Winning Nights.

To secure your seats for the most anticipated game of the season, visit TICKETMASTER or contact the Paramount Fine Foods Centre Box Office at (905) 502-9100.