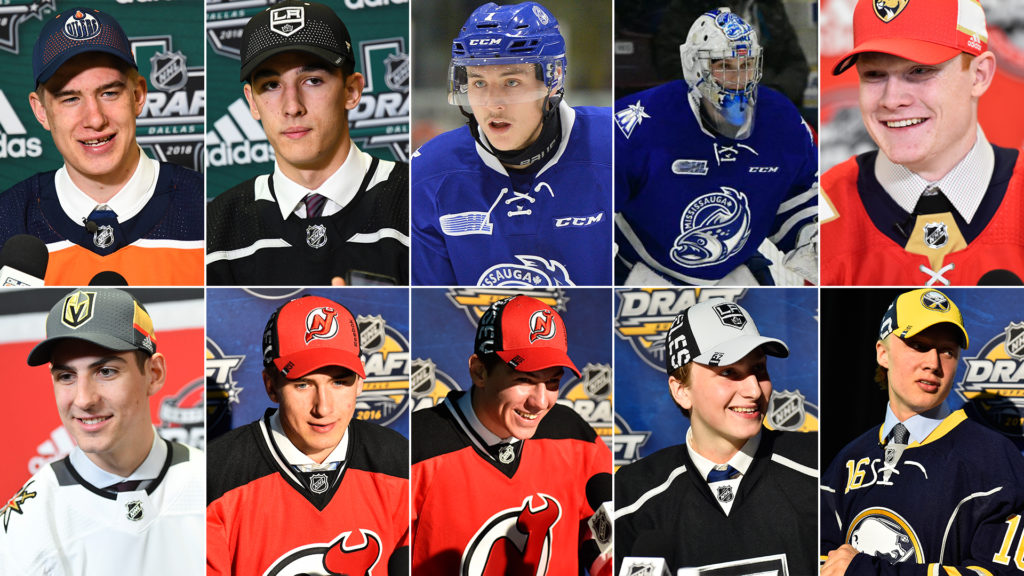 With the 2018 NHL Entry Draft in the rear-view mirror, it’s a quick turnaround as several teams began their development camps this week. These development camps include picks, prospects, and undrafted invitees from the past couple years. The players typically undergo on- and off-site training and camps tend to conclude with intra-squad scrimmages.

Forward Ryan McLeod had little time to reflect on being chosen in the second round, 40th overall by the Edmonton Oilers. McLeod was drafted on Saturday in Dallas before flying to Edmonton to report to their development camp which started on Monday, June 25, and will continue through Wednesday, June 27. The camp takes place at the Downtown Community Arena in Edmonton, Alberta.

Fellow 2018 NHL Draft pick, goaltender Jacob Ingham, was chosen in the sixth round, 175th overall by the Los Angeles Kings. The Kings, who have excelled at developing goalies, will host their development camp at the Toyota Sports Center in El Segundo, California. Ingham will see a familiar face in teammate Jacob Moverare, who was selected by the Kings in the fourth round (112th overall) of the 2016 NHL Entry Draft. The camp will run from Tuesday, June 26 to Friday, June 29.

Despite being passed over in the draft, two Mississauga Steelheads were invited to NHL development camps this week as well. Netminder Emanuel Vella was invited to the New York Islanders’ camp which takes place at the Northwell Health Ice Center in East Meadow, NY, from June 25 – June 29. Forward Michael Little was another undrafted development camp invitee, getting the call from the Nashville Predators to join them for their camp June 25 – June 29 in Nashville, Tennessee.

Returning for the second year to their respective team’s development camps will be 2017 draftees Owen Tippett and Nicolas Hague. Hague had an excellent 2017-18 season patrolling the blueline for the Steelheads scoring 78 points in 67 games. He will be back in Sin City for the Vegas Golden Knights camp taking place June 26 – June 30 in Las Vegas, Nevada.

As a former first round pick, Tippett will be back as a leader at the Florida Panthers development camp. After playing himself onto the opening night roster last year, he played in seven NHL games at the beginning of the season before being sent back to Mississauga.  He will join the rest of Florida’s prospects at the Panthers IceDen in Coral Springs, Florida, from June 26 – June 29.

The super-buddies Nathan Bastian and Michael McLeod are expected to reunite soon as New Jersey’s development camp will take place in Newark in two weeks. The complete roster and details of the annual event will be announced soon.

Rounding out the list is former Steelheads forward Alex Nylander, who was drafted in the first round, eighth overall in 2016. The dynamic forward will be attending the Buffalo Sabres development camp at HarborCenter in Buffalo, NY, from June 27 through June 30. With a handful of NHL games and two AHL seasons under his belt, Nylander will be pushing for a full time roster sport with the Sabres next season.

These development camps give the teams a closer look at their new draft picks, while the players have a chance to familiarize themselves with their new team, including coaches, trainers, fellow prospects and facilities.