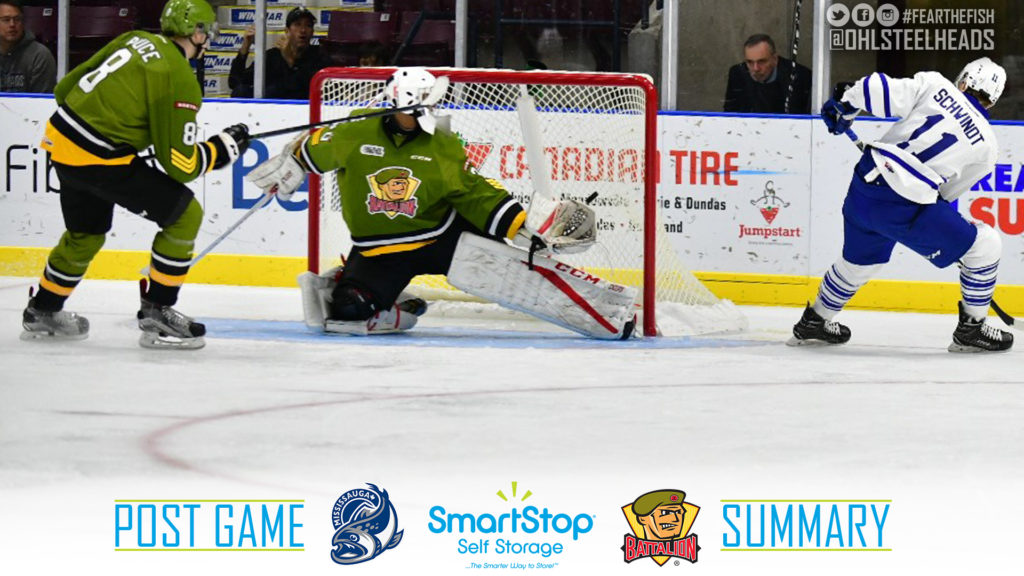 Following four consecutive losses on the road, the Steelheads were happy to be back on home ice Friday night to host the North Bay Battalion. Mississauga’s special teams came out to work tonight, capitalizing three times while the Battalion sat short-handed. Happy to be back in the lineup, Shaw Boomhower has made his presence known, netting three goals in just two games, including tonight’s opening goal. Boomhower capitalized on a power play opportunity, sneaking the puck past North Bay’s rookie goaltender, Christian Purboo at 14:19. Assists on Boomhower’s fifth of the season went to Ryan McLeod and Adam Varga. With less than a minute to play in the opening frame, the Steelheads would capitalize on the man-advantage again as defenceman, Nic Hague put home his third of the season. Merrick Rippon and Trent Fox assisted on the goal. Shots on goal in the opening period were 13-12 in favour of North Bay, but the Steelheads held a 2-0 lead on the scoreboard heading into the first intermission.

Early in the second, North Bay’s Justin Brazeau would head to the box on a tripping call, sending the Steelheads back to the power play. Unfortunately, the Battalion capitalized on a miscommunication, and Patrick Brown scored a shorthanded goal to bring North Bay within one. Brazeau’s penalty expired and the game returned to even strength, but seconds later, Trent Fox restored the Steelheads’ two-goal lead from Merrick Rippon and Albert Micnach. At 9:48, the Steelheads’ power play unit would go back to work as North Bay’s Kyle Potts was sent off for slashing. The Steelheads were quick to take advantage as Jacob Cascagnette found the back of the net, giving the Steelheads a nice 4-1 cushion. Ryan McLeod and Nic Hague assisted on Cascagnette’s second of the season. Late in the frame, the Steelheads penalty kill would be put to the test as North Bay had two 5-on-3 opportunities. They did a terrific job killing all the penalties and even added a shorthanded goal to increase their lead 5-1. Cascagnette picked up his second of the night from Michael Little as the Steelheads held a comfortable four-goal lead heading into the final period.

At 8:32 of the third, Cole Schwindt jumped out on a breakaway. Purboo made the initial stop, but was Schwindt buried his own rebound to bring the score to 6-1. Michnac assisted on Schwindt’s third of the season. With five minutes remaining in the third, Cameron Gaylor added to the lead with assists going to Mason Hardy and Ian McKinnon. The Steelheads went 3/5 on the power play, while Vella picked up his second win of the season, turning away 24 shots.

The Steelheads are back home on Sunday to host the London Knights for a 2PM start.