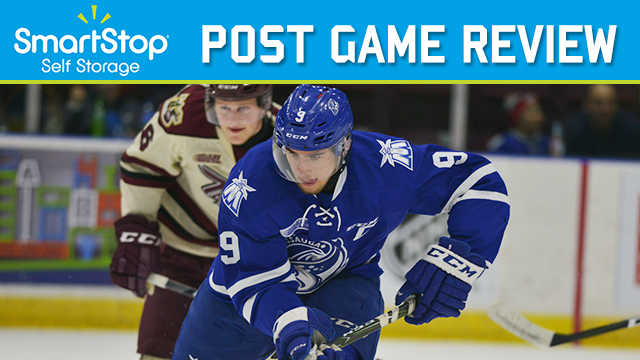 After coming off an exciting victory over the Owen Sound Attack on Monday, the Steelheads looked to get on a streak Friday evening against the Eastern Conference leading, Peterborough Petes. Fans and scouts alike, knew it was going to be a heated affair with the top two teams in the East facing off.

Both teams got off to a strong start, exchanging shots and hits. The Steelheads opened up the scoring with a power play goal scored by Michael McLeod at just over the halfway mark of the first. Steelheads goalie, Jacob Ingham, making a couple of great saves to keep the lead for the Steelheads after 20 minutes.

Heading into the second, both teams came out flying. Steelheads captain, Michael McLeod, scores his second of the game only 2:40 into the period. A few minutes later, Nic Hague took Mississauga’s first of three penalties during the second period. While shorthanded, Michael McLeod broke out and set up a pretty drop pass to Nathan Bastian, who scored for the Steelheads. The Trout had a chance on the power play, and capitalized with a goal from Jacob Cascagnette. After peppering the Steelheads with 15 shots in the second period, the Petes finally score one from forward, Logan DeNoble.

The Steelheads completely dominated the third and final period. They fired everything they had on Petes’ goaltender, Scott Smith. The Steelheads scored a total of 6 goals in the third period. Spencer Watson scored two goals, and Michael McLeod scored his third goal of the game, recording a hat trick, and career high 6-points. Vili Saarijarvi, Austin Osmanski, and Marcus Dickerson each tallied a goal of their own as well. Jacob Ingham completely shut the door in the third. Helping the Steelheads win by a final score of 10-1.

The Steelheads are back in action Saturday Night in the first game of a home and home with our divisional rival, Sudbury Wolves. Puck drops in Sudbury, at 7:00pm.