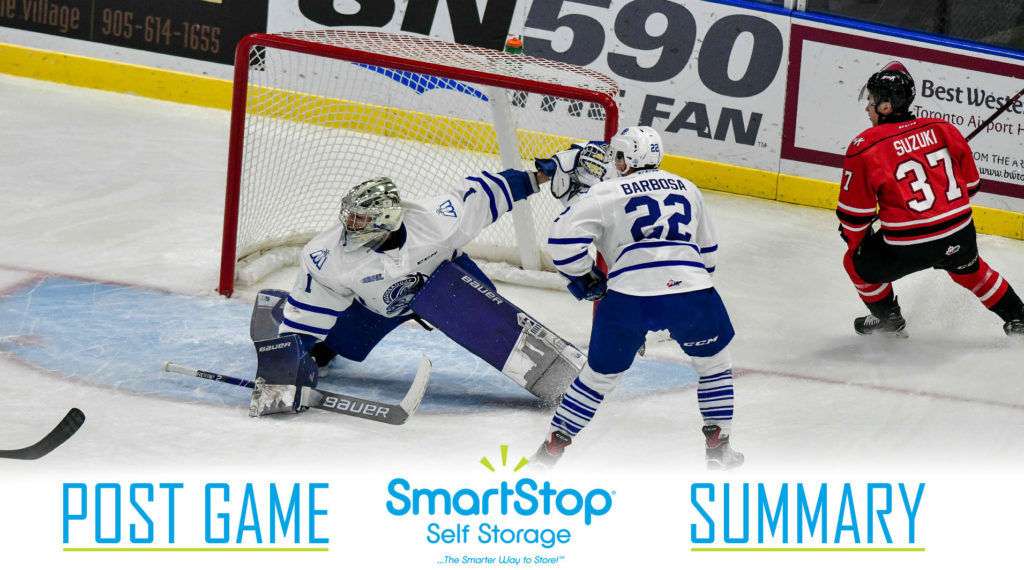 SAULT STE. MARIE, ON-The Mississauga Steelheads wrap up their 3-in-3 Northern road trip this past weekend. Aside from this weekends losses, the Steelheads have played some well-rounded hockey, alongside five new additions since the trade deadline Thursday afternoon.

Jacob Ingham got the start for the Steelheads Saturday night allowing 27 stops on 33 shots while Ethan Taylor turned aside 30 of 33 shots in the win for the Greyhounds.

The Steelheads got to work early in this one. Just under two minutes into the opening stanza, rookie James Hardie picked up the Greyhounds turnover and hammered home the one-timer. Hardie would register his 8th goal of the season unassisted.

O’Rourke would tie the game for the red and white at the halfway mark in the first. Just seconds after a Steelheads penalty kill expired, Zack Trott would find Ryan O’Rourke down the middle slot and the two put the Greyhounds on the board, making it 1-1. With over five minutes to go in the first, Joe Carroll would head to the box as Barret Hayton and Morgan Frost set up a 2-on-1 while short-handed to give the home team their first lead of the night. Hayton would register his 17th goal of the season with the support of Morgan Frost and Jacob LeGuerrier.

Starting off the second period on the power play, Steelheads Captain Cole Carter would pick up the rebound and net the goal in the first minutes of play. Thomas Harley and Liam Ham are credited the helpers on Carter’s 26th goal of the season. Shortly after, William Portokalis responded by depositing his second OHL goal beating Ethan Taylor on the blocker side to bring his team to a 3-2 lead. C.J. Clarke and Nicholas Canade drew the assists on Portokalis’ 2nd goal in his rookie season with the club.

Alan Lyszczarczyk would open the last period of play bringing the Steelheads within one. Lyszczarczyk now leads the Trout with 49 points alongside Steelheads Captain, Cole Carter. The remainder of the third period saw plenty of scoring chances at both ends but Ingham and Taylor stood tall between the pipes as the SOG sat at 34/33 a piece for Mississauga. Barrett Hayton would add an empty netter and the insurance marker for the Greyhounds with less than two minutes left in regulation.

The Steelheads will play host on Friday night to the Flint Firebirds at the Paramount Fine Foods Centre for the Firebirds first and only visit to Mississauga this season. The boys will then visit Owen Sound on Saturday, January 19th for a 7:30 puck drop before returning home Sunday as we welcome the Sarnia Sting and our 7th annual Bell Let’s Talk game.