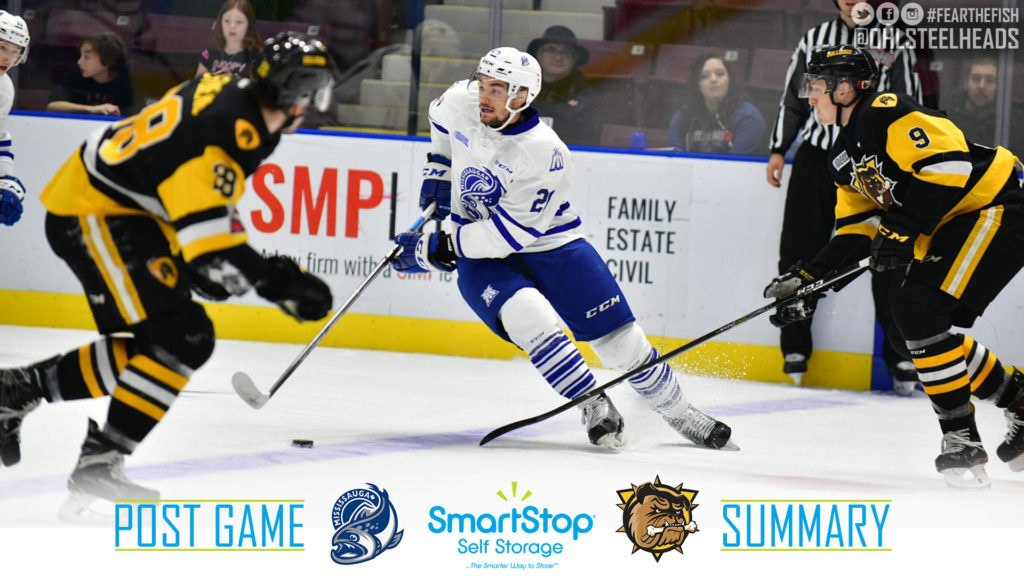 The Steelheads came into Sunday’s game looking to snap a five game losing streak as they visited the Hamilton Bulldogs. Jacob Ingham was back between the pipes for the Steelheads and Kaden Fulcher made the start for the Bulldogs.

The Steelheads did not get the start they wanted as some penalty trouble cost them and they trailed the Bulldogs by two after 20 minutes of play. Hamilton’s Justin Lemcke opened the scoring at 13:27, assisted by Nicholas Caamano and Ryan Moore. Late in the frame, the Bulldogs converted on another power play opportunity as Brandon Saigeon put the home team up 2-0 from Matt Strome and Will Bitten. Shots on goal after one were 14-8 in favour of the Bulldogs.

Michael McLeod cut the Bulldogs’ lead in half at 5:05 of the middle frame, tapping home a pass from brother, Ryan. Albert Michnac picked up the secondary assist on McLeod’s fifth of the season and lone goal of the frame. The Steelheads outshot the Bulldogs 9-7 in the second and trailed by one heading into the final frame.

The Steelheads found themselves down by three as the Bulldogs added two goals in the first half of the final frame. Matt Strome scored at 7:20 from Moore and Marian Studenic, and Studenic added Hamilton’s fourth goal at 11:10. A minute later, Merrick Rippon shifted the momentum firing a shot from the point that beat Fulcher. The goal was Rippon’s first career OHL goal and was assisted by the McLeod brothers. Late in the frame, Nic Hague brough the Steelheads within one, firing a shot from the high slot past Fulcher to bring the score to 4-3. Hague’s 16th of the season was assisted by Ryan McLeod and Jacob Moverare. Desperate to even the score and send this game to extra time, the Steelheads pulled Ingham in favour of an extra attacker. The last stitch effort fell short as Hamilton gained possession and found the empty net to seal a 5-3 win.

The Steelheads will be back in action Thursday to visit the North Bay Battalion before returning home to host the Barrie Colts on Friday.